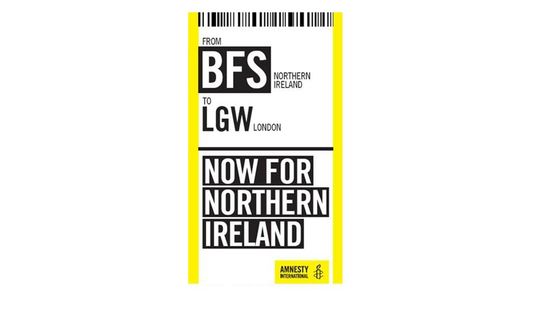 On Tuesday (26 February), 28 women – representing the number of women who travel from Northern Ireland to England or Wales for an abortion each week – will join a ‘suitcase march’ demonstration to hand in Amnesty International’s petition to the Secretary of State for Northern Ireland demanding that abortion is decriminalised in the region.

The 28 women – including Derry Girls cast members Siobhan McSweeney and Nicola Coughlan; women who have been affected by Northern Ireland’s restrictive law; cross-party MPs including Karin Smyth, Diana Johnson, Heidi Allen and Christine Jardine; and abortion rights activists – will walk with suitcases from Westminster Bridge, around Parliament Square, to the Northern Ireland Office.

There will then be a photo opportunity with the women holding their suitcases - which will be covered in airport luggage-style stickers with messages reading ‘BFS-GTW’ and ‘NOW FOR NORTHERN IRELAND’ – and placards which say, ‘Abortion is not a crime’ and ‘62,000 call on Northern Ireland Secretary to act now’.

“The North has been neglected for too long. It makes me so angry that women there are being denied bodily autonomy and health care services available to others in the rest of the UK and Ireland – they have reproductive rights too. I’ll be here fighting alongside Amnesty for Northern Ireland until the degrading law there is changed. It has to happen soon.”

“It was such a proud moment when we Repealed the 8th in Ireland but it’s now time our sisters in Northern Ireland get the change so desperately overdue. Let’s do this for women everywhere. Women who have abortions are not criminals, it’s time the law stopped treating them as such.”

“62,000 people are calling on the Northern Ireland Secretary of State to decriminalise abortion. They recognise the grave harm caused by the existing law and want change.

“All eyes are firmly on the Secretary of State to see how she’ll respond. For too long our demands for equality have been ignored and our rights sacrificed for political expediency.

“The time for change is now. Northern Ireland cannot be left behind as the only part of the UK and Ireland with a near total ban on abortion. It’s 2019 - time we had laws that respect and value women’s lives.”