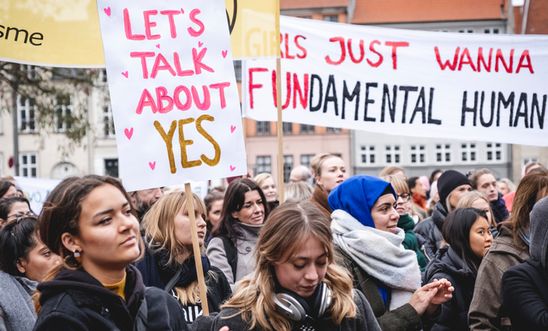 Campaigners at a rally in Denmark last year © Jonas Persson

‘Shockingly, Denmark will be only the tenth country in Europe to recognise that sex without consent is rape in law’ - Anna Błuś

“This commitment by the new Government to amend Danish law to recognise the simple truth that sex without consent is rape in law, is a welcome, if long-overdue, step forward.

“It is a testament to all the survivors who have spoken out, and all the campaigners who have fought long and hard for change.

“Together with the survivors campaigning for improved access to justice, we look forward to seeing the draft law and hope that the authorities also commit themselves to taking steps to challenge rape myths and gender stereotypes at all levels of society. This will require institutional and social change, as well as comprehensive sexuality and relationships education, including on sexual consent.

“Shockingly, Denmark will be only the tenth country in Europe to recognise that sex without consent is rape in law.

“However, coming hard on the heels of the decision to amend the law in Greece this month, and legislation in Sweden last year, we are confident that the momentum for change in Europe and beyond is now unstoppable.”

Amnesty has analysed rape legislation in 31 countries in Europe, and only nine of them have laws that define rape as sex without consent.

Rape in Denmark is hugely under-reported, and even when women do go to the police the chances of prosecution or conviction are very slim. Of the 24,000 women in Denmark found by a recent study to have experienced rape or attempted rape in 2017 alone, just 890 cases were reported to the police. Of these, 535 resulted in prosecutions and only 94 in convictions.

Earlier this year, Amnesty published a major report on rape in Denmark, showing that out-dated laws and what it called an “insidious culture of victim-blaming” had left Denmark with some of the highest levels of rape in Europe.