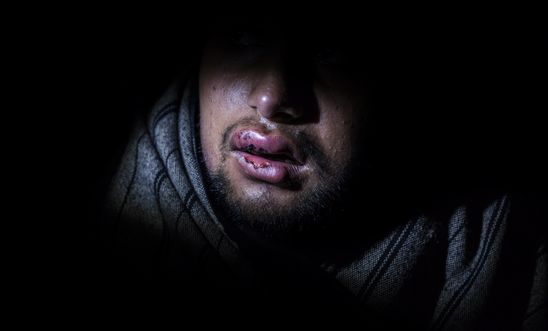 ‘The European Union can no longer remain silent’ - Massimo Moratti

In a horrifying escalation of police human rights violations at the Croatian border with Bosnia, a group of migrants and people seeking asylum were recently bound and tortured by officers who mocked their injuries and smeared food on their bleeding heads to humiliate them, Amnesty International UK has revealed today.

In a new investigation, Amnesty spoke to six men among a group of 16 Pakistani and Afghan people apprehended by Croatian police during the night of 26-27 May near Lake Plitvice.

Between eight and ten people wearing black uniforms and balaclavas identical to those used by Croatia’s Special Police, fired their weapons in the air, then kicked and repeatedly hit the restrained men with metal sticks, batons and pistol grips. They then rubbed ketchup, mayonnaise and sugar belonging to one into the migrants’ bleeding heads and hair. Amnesty also spoke to doctors who treated the men and NGOs who witnessed their injuries

Ten men suffered serious injuries as a result of the sustained attack. Tariq, 30, now has both of his arms and a leg in a cast (his is now required to use a wheelchair), visible cuts and bruises on his head and face, and is suffering from severe chest pain. He told Amnesty:

“They did not give us a chance to say anything at all when they caught us. They just started hitting us. While I was lying on the ground, they hit my head with the back of a gun and I started bleeding. I tried to protect my head from the blows, but they started kicking me and hitting my arms with metal sticks. I was passing in and out of consciousness the rest of the night.”

Amir from Pakistan had a broken arm and nose, stiches on the back of his head, and visible bruising all over his face and arms. He told Amnesty:

“We were pleading with them to stop and show mercy. We were already tied, unable to move and humiliated; there was no reason to keep hitting us and torturing us. They were taking photos of us with their phones, and were singing and laughing.”

Amnesty has shared the details of this incident with Croatia’s Ministry of Interior, but has not received an official response.

“The European Union can no longer remain silent and wilfully ignore the violence and abuses by Croatian police on its external borders. Their silence is allowing, and even encouraging, the perpetrators of this abuse to continue without consequences.

“We expect nothing less than the condemnation of these acts and an independent investigation into reported abuses, as well as the establishment of an effective mechanism to ensure that EU funds are not used to commit torture and unlawful returns.

The men told Amnesty how they felt humiliated as their attackers rubbed mayonnaise and ketchup on to their bloody heads and faces. One masked man squirted mayonnaise on one of the men’s trousers between his legs, while others laughed and sang “Happy Birthday” around them.

After almost five hours of abuse, the migrants were handed over to the Croatian Border Police who transported them to an area close to the border with Bosnia and Herzegovina in two vans before ordering them to walk. Some of the men eventually reached Miral, a reception centre run by the International Organisation for Migration in Velika Kladusa in Bosnia and Herzegovina. Five, who were too weak to walk, stayed behind and were eventually assisted by an NGO.

An emergency doctor at the medical clinic in Velika Kladusa who treated the men told Amnesty they all had injuries on the back of their heads which were consistent with blows by a blunt object. Their head wounds required stiches and most of the men had multiple fractures, joint injuries, collapsed lungs, cuts and bruises, and several were badly traumatised. Their recovery could take months.

The shocking incident points to a new level of brutality and abuse by Croatian police. In early May, the Guardian newspaper reported that a group of men were forced across the Croatian border after being beaten and having orange crosses spray-painted on their heads. The Croatian Ministry of Interior dismissed these reports.

Numerous reports over the past three years point to Croatian border police routinely assaulting men, women and teenagers trying to enter the country, destroying their belongings before forcing them back to Bosnia. People have sometimes been stripped of their clothes and shoes, and forced to walk for hours through snow and freezing-cold rivers.

A doctor in in the Velika Kladusa clinic told Amnesty that approximately 60% of migrants and people seeking asylum who required medical treatment reported that their injuries were inflicted by Croatian police as they were trying to cross the border.