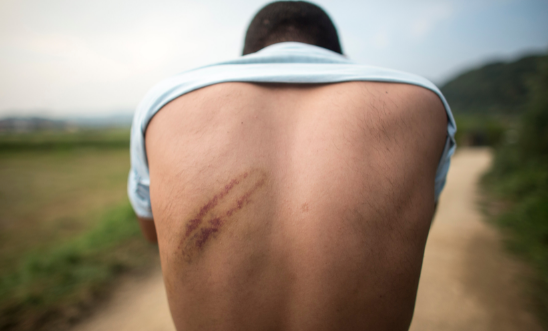 A refugee shows traces of the beating by Croatian police in Refugee camp in Velika Kladusa, Bosnia and Herzegovina on August 9, 2018. © NurPhoto via Getty Images

Evidence has found people being kicked, repeatedly struck with rubber batons, or wooden sticks and attacked by police dogs

‘After today, there can be no doubt about the abuses being committed’ - Massimo Moratti

Croatian authorities have consistently assaulted refugees and migrants and denied them access to asylum, in contravention of European and International law, Amnesty International said, in response to a damning report released by the Council of Europe’s Committee on Prevention of Torture (CPT) today.

The CPT documented cases of people being kicked, repeatedly struck with rubber batons, or wooden sticks and attacked by police dogs. In some cases, people intercepted by the Croatian police were stripped of their possessions, including clothes, shoes, and even underwear, and forced to walk for kilometres to the country’s border with Bosnia and Herzegovina.

The CPT has concluded that Croatian authorities’ attempts to justify the abuses documented in the report do not constitute a plausible explanation for the many serious injuries compatible with police ill-treatment.

“In the last few years thousands of people have recounted how Croatian police assaulted them as they tried to enter the country and refused to let them request asylum.

“This long-awaited report confirms their stories and numerous reports of widespread pushbacks and abuse, which the Croatian government can now no longer deny.

“The violence and abuse documented here point to a systematic and deliberate practice designed to punish those who try to cross the border. It may amount to torture, cruel, inhuman or degrading treatment on the part of the Croatian authorities.”

The CPT strongly criticised Croatian authorities’ failure to conduct thorough and timely investigations into complaints of police misconduct and noted that the files of a few completed cases “fail to demonstrate any fact-finding investigative acts worthy of the name.” Moreover, the CPT noted that these “investigations”, which should have been conducted by an independent body, were instead carried out by police officers themselves, undermining any notion of independence or impartiality.

“The CPT’s scathing comments about the failure of Croatian authorities to properly investigate ill-treatment confirm the Croatian government’s long-standing tactic of vehemently denying any wrongdoing while effectively preventing any independent scrutiny of its abuses. This has allowed violence to continue unchecked and with impunity.”

In July, the Croatian government finally set up an oversight mechanism which was meant to provide independent human rights monitoring of border-related operations. The CPT noted that effective human rights monitoring should be financially and operationally independent and have unfettered access, without notice, to border areas, relevant documentation and the victims of alleged violations. In practice, however, the authorities and the European Commission, which supported the mechanism’s establishment with funds and expertise, failed to ensure that it meets these standards.

The European Commission has not taken any decisive action against Croatia despite overwhelming and credible reports of gross human rights abuses at the Croatian borders, some of which may have been committed with the assistance of EU funds. In fact, the Commission provided additional emergency funding to Croatia in July this year without seeking guarantees from the Croatian authorities that the allegations of ill-treatment would be effectively investigated, and that the monitoring mechanism would comply with key standards of independence, effectiveness and accountability.

“The Commission keeps missing opportunities to hold Croatia to account for widespread violations of EU law while continuing to support it with additional funds and resources. This raises serious questions about the EU’s potential complicity in human rights violations that are regularly documented on Croatian borders.

“The European Commission has long claimed that the consistent and credible reports by human rights organisations and media have not been officially confirmed. After today, there can be no doubt about the abuses being committed.”