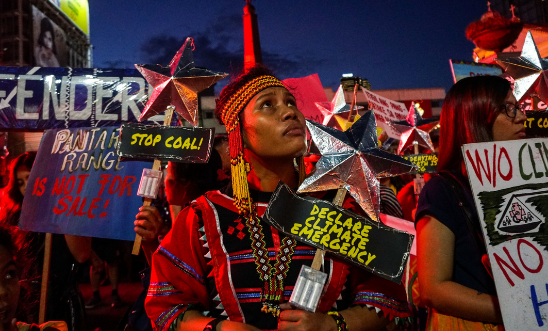 Philippine activists take part in a rally calling for action against climate change, in Manila on November 29, 2019. © AFP via Getty Images

Ahead of her attendance at climate conference, Amnesty Secretary General warns of threat to human rights and demands that leaders ‘wake up’

‘As the climate crisis intensifies with every passing day, so do the losses to our human rights’ - Agnès Callamard

Ahead of the UN climate change conference COP26, Amnesty International is calling on world leaders to urgently address the climate crisis, protect countries most vulnerable and prevent further loss of life and other human rights violations.

“The climate emergency is a human rights crisis of catastrophic proportions, and our leaders need to wake up and start acting like it.

“There has been a lot of noise, easy promises and symbolic gestures from world leaders on climate change, but no effective action. Many countries have failed to meet even existing commitments to submit updated pledges to reduce emissions.

“We don’t have the luxury of time for missed deadlines or political posturing.

“This year alone we’ve seen massive rainfall in Indonesia and Germany, scorching temperatures from Canada to Pakistan, and devastating drought in Madagascar - each calamity a warning bell that calls for ever bolder action.

“As the climate crisis intensifies with every passing day, so do the losses to our human rights. Lives are being lost, and our rights to health, adequate housing, food, water, sanitation and many more are threatened.

“As countries enter these pivotal negotiations, they have the weight of humanity’s future resting on their shoulders. But they also have the vast collective will of communities around the world urging them on to take fair and rapid action in saving and sustaining our planet. Let’s hope our leaders are not found wanting.”

Amnesty is calling on all countries to: