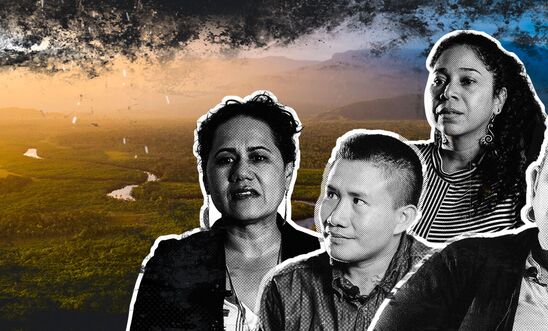 ‘Things have got even worse’ - Erika Guevara-Rosas

A wave of threats, attacks and killings of people defending land, territory and the environment in Colombia has highlighted the government’s failure to address the crisis facing the country’s human rights defenders, Amnesty International said in a new report published today (8 October).

Amnesty’s 46-page report - Why do they want to kill us? The lack of a safe space to defend human rights in Colombia - examines the reasons behind the violence against community leaders living in geographically strategic and natural resource-rich areas.

The report also analyses the ineffectiveness of the protection measures implemented by the government since the Peace Agreement signed with the Revolutionary Armed Forces of Colombia (FARC) in 2016.

*The Process of Black Communities in Buenaventura, Valle del Cauca;

*And the Association for the Sustainable Integrated Development of the Perla Amazónica in Putumayo.

Representatives from each of the communities told Amnesty of the threats and attacks they suffered while defending land and the environment. Members of the Catatumbo Social Integration Committee, for example, explained that because they live in one of Colombia’s largest coca-producing areas, they are stigmatised, harassed, attacked and accused of supporting the armed groups that operate in the area.

Indigenous peoples’ communities throughout the country also suffer frequent attacks due to their defence of land and natural resources. In the department of Meta, for example, the failure to recognise the land rights of the Kubeo-Sikuani indigenous community has left them unprotected and under threat.

“For years, Colombia has been one of the world’s most dangerous countries for people who are defending human rights, territory, and natural resources. Since the Peace Agreement was signed in 2016, however, things have got even worse, particularly for those living in geographically strategic and natural resource-rich areas.

“Defenders will continue to die until the government effectively addresses structural issues such as the deep inequality and marginalisation suffered by communities, ownership and control of the land, substitution of illicit crops, and justice.

“If they truly want to protect environmental defenders, the Colombian authorities need to listen to the communities at risk, help them improve the strategies already in place and ensure justice for those who attack them.”

The COVID-19 pandemic has put human rights defenders at even greater risk. During the pandemic, the authorities have reduced the protection schemes in place for some human rights defenders, and authorised activities that have put communities at increased risk, such as natural resource extraction, police operations and forced eradication of illicit crops.

Colombia has established a range of measures, at least on paper, to protect human rights defenders. At least 14 of these measures directly or indirectly address the issue of collective protection. However, the institutions and their programmes are plagued by ineffectiveness.

The National Protection Unit only grants measures such as guards, mobile phones and armoured cars on a highly individual basis, and generally within urban areas. The Early Warning System, designed to provide collective protection, is of little effect because there are no consequences for state bodies that fail to comply with its measures. The set of actions adopted by the Colombian authorities to prevent risk, counteract threats and minimise the vulnerabilities of groups and communities (known as the Collective Protection Route) are also not being effectively implemented.