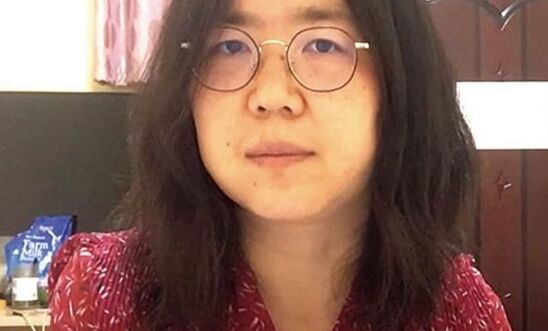 ‘If Zhang Zhan dies in prison, her blood will be on the Chinese government’s hands’ – Gwen Lee

A Chinese citizen journalist jailed for reporting on the early days of the Covid-19 pandemic in Wuhan is at risk of dying if she is not urgently released to receive medical treatment, Amnesty International said today.

Zhang Zhan, who was sentenced to four years in prison last December for posting on social media about China’s handling of the outbreak, has been on hunger strike in protest at her incarceration. Her family say they do not expect her to live through the winter if she is not released on medical grounds.

“Zhang Zhan, who should never have been jailed in the first place, now appears to be at grave risk of dying in prison.

“The Chinese authorities must release her immediately so that she can end her hunger strike and receive the appropriate medical treatment she desperately needs.

“The Chinese government’s prosecution of Zhang Zhan, simply because she tried to uncover what was happening in Wuhan amid huge government secrecy about the pandemic, is a shameful attack on human rights.

“If Zhang Zhan dies in prison, her blood will be on the Chinese government’s hands.”

Amnesty International is calling for the immediate release of Zhang Zhan as part of its 2021 Write for Rights campaign.

Jailed for reporting on COVID-19

Zhang Zhan, a former lawyer, travelled to Wuhan in February last year to provide on-the-ground information about what was unfolding. She posted on social media about how government officials had detained independent reporters and harassed the families of Covid-19 patients.

She went missing in Wuhan in May 2020. It later emerged that she had been taken by the Chinese authorities and detained in Shanghai, where she was convicted of “picking quarrels and provoking trouble” after a sham trial.

In June 2020, Zhang began a hunger strike in protest at her detention. By December, her body was so weak she had to attend her trial in a wheelchair.

Prior to the trial, authorities force-fed her and restrained her for days at a time to prevent her from removing a feeding tube. They also forced Zhang to wear shackles and hand restraints 24 hours a day for more than three months as punishment for her hunger strike.

On 31 July this year, she was admitted to hospital due to severe malnutrition. However, she was returned to prison and remains on a partial hunger strike despite the grave risk to her health, which continues to deteriorate at an alarming rate.

Since her trial, the authorities have refused to let her speak to her lawyer or meet her family in person. She has been allowed occasional phone or video calls with relatives, but always under supervision.

In a Twitter post on last month, her brother Zhang Ju wrote: “I don't think she's going to live much longer. If she doesn't make it through the coming winter, I hope the world will remember her as she once was.”

Citizen journalists were a vital source of uncensored, first-hand information about the Covid-19 outbreak in China. Because they work independently of state-controlled media, citizen journalists face constant harassment for exposing information the Chinese government would rather keep quiet.

There is an alarming pattern of deaths of imprisoned Chinese activists, either in detention or after being belatedly released on medical parole.

In July 2017, human rights activist and Nobel Laureate Liu Xiaobo died in custody after the authorities refused his and his family’s requests to receive treatment abroad for his cancer.

Beijing activist and prominent campaigner Cao Shunli died from organ failure after months in custody in March 2014. She was denied appropriate medical treatment while in jail.