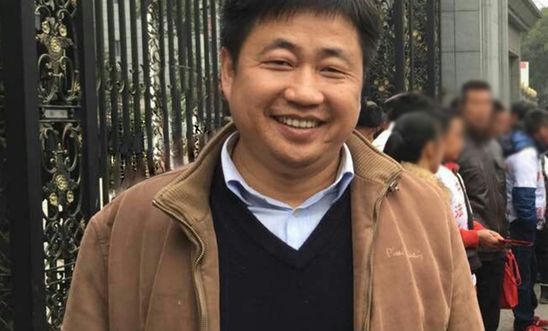 The release of human rights lawyer Xie Yang on bail does not represent a break in China’s relentless crackdown against lawyers and activists, Amnesty International said today.

Xie Yang was tried in Changsha City Intermediate People’s Court in southern China on Monday for “inciting subversion of state power” and “disrupting court order” and apparently released on bail, even though a verdict has not been announced.

“This unusual sequence of events does nothing to alleviate the concerns about torture in this case.

“While it is a relief that Xie Yang is no longer in detention, it doesn’t diminish the fact that he should never have been arrested in the first place.

“While on bail, Xie Yang is likely to experience constant surveillance and severe restrictions to his freedom of movement as we have witnessed in other such cases. Such tactics appear to be the authorities’ modus operandi against those defending human rights.”

The court announced the trial would be broadcast on Weibo, a Chinese social media platform, only approximately 20 minutes before it began.

At the trial Xie Yang said that he was not tortured, contradicting what he told his lawyers in January when he recounted prolonged torture he had suffered during his detention, including lengthy interrogations, beatings, and deprivation of water and sleep.

“The charges against Xie Yang are baseless. The authorities know it and that is why they have resorted to torture and other forms of coercion against him and his family.”

Xie Yang is one of almost 250 lawyers and activists targeted in an unprecedented crackdown by the Chinese government which started in July 2015.

Xie Yang’s family had also been threatened in an attempt to coerce him to “confess” and provide incriminating statements against other human rights defenders. Xie Yang was represented at the trial by court-appointed lawyers after those hired by his family were removed from the case by the authorities.

The authorities have repeatedly warned Chen Jiangang, one of Xie Yang’s original defence lawyers, to stop discussing the case with international media and initiated an investigation into Chen’s own eligibility to practice law.

Chen Jiangang and his family were taken away by police in Yunnan when they were travelling there on Wednesday 3 May, along with activist Zhang Baocheng and Zhang’s wife Liu Juefan. After they were released, Chen had to drive back to Beijing from Yunnan, escorted by public security officers while Chen’s wife and their two young children were allowed to take a flight back to Beijing.

The detention of lawyer Wang Yu and her family on 9 July 2015 marked the beginning of an unprecedented government crackdown on human rights lawyers and other activists. Over the following weeks, almost 250 lawyers and activists were questioned or detained state security agents, and many of their offices and homes were raided.

Apart from Xie Yang, another five have been convicted of “subverting state power”. In August 2016, activists Zhai Yanmin and Gou Hongguo, aka Ge Ping, were given suspended prison sentences. Activist Hu Shigen and lawyer Zhou Shifeng were sentenced to seven-and-a-half years and seven years’ imprisonment respectively. Lawyer Li Heping was tried in Tianjin on 25 April and then sentenced to three years imprisonment, suspended for four years, on 28 April. His whereabouts remained unknown after the verdict until he returned home on 9 May, although images show he has lost weight and his hair has turned noticeably grey.

Three others remain in detention and are awaiting trial dates or verdicts. The trial date of human rights lawyer Wang Quanzhang still has not been set. Activists Yin Xu’an and Wang Fang are still waiting for their verdicts after appearing in court in September last year and in February this year respectively.