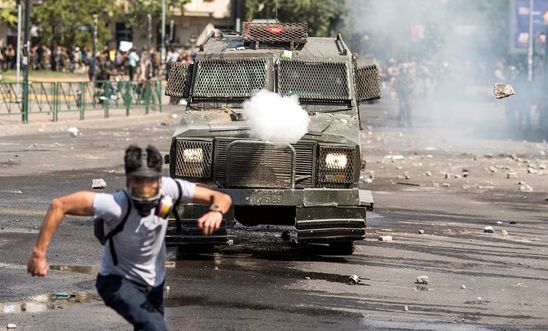 At least five people have died at the hands of the security forces since the protests started. © Mateo Lanzuela

‘The intention of the Chilean security forces is clear: to injure demonstrators in order to discourage protest’ - Erika Guevara-Rosas

Widespread attacks against protesters by security forces under the command of Chilean President Sebastián Piñera have led to the deaths of at least five people while thousands of others have been seriously injured, tortured or abused Amnesty International said this week.

Following a research mission to the country, Amnesty obtained and verified more than 130 pieces of audio-visual and photographic evidence of unnecessary and excessive use of force. The evidence found these attacks were not isolated or sporadic incidents but instead reveal a consistent pattern of human rights violations throughout the country.

Amnesty researchers documented 23 cases of human rights violations in the regions of Valparaíso, Tarapacá, Bío-Bío, Antofagasta, Coquimbo, Maule and Araucanía, as well as in 11 communes in the Santiago Metropolitan Region between 19 October and 11 November.

“The intention of the Chilean security forces is clear: to injure demonstrators in order to discourage protest, even to the extent of using torture and sexual violence against protesters. Instead of taking measures to curb the very grave human rights crisis, the authorities, under the command of President Sebastián Piñera, have pursued a policy of punishment for over a month, adding yet more people to the staggering number of victims, which is continuing to rise to this day.

“Individual criminal responsibility for these events does not stop at the prosecution of the person who pulled the trigger. Guaranteeing justice and non-repetition of these incidents, must involve sanctions against those superiors who, in the full knowledge of the crimes committed by officials under their command, have ordered or tolerated them day after day.”

Death of protesters amidst widespread protests

Demonstrations in Chile began in mid-October in response to a fare increase on public transport. In response to the protests, President Piñera imposed a state of emergency on 19 October. The Chilean army was deployed onto the streets and has since used lethal weapons for policing operations during demonstrations on several occasions.

According to the National Human Rights Institute (NHRI), at least five people have died at the hands of the security forces and more than 2,300 have been injured; more than 1,400 of those injured sustained gunshot wounds and 220 suffered severe eye trauma since protests began.

The Public Prosecutor's Office has registered more than 1,100 complaints of torture and other cruel, inhuman or degrading treatment, as well as more than 70 crimes of a sexual nature committed by public officials. According to the national police, none of its officials have died, but some 1,600 have been injured, 105 of them seriously.

Use of lethal force

Amnesty documented five deaths resulting from actions by members of the security forces: four at the hands of army officers and one by a member of the national police. Two were the result of the use of military grade weaponry.

By analysing images, Amnesty was also able to confirm that lethal weapons had been indiscriminately used by the army against unarmed protesters on at least four occasions.

Romario Veloz, a 26-year-old Ecuadorian national, died after he was shot in the neck by a soldier as he was taking part in a small march in the city of La Serena. When the march arrived at a local park, soldiers opened fire indiscriminately on protesters assembled there. Videos of the shooting show Veloz walking along calmly with his hands in his pockets.

At that same event, Rolando Robledo, aged 41, was shot by a soldier and wounded in the chest. He spent several days in a coma in a critical condition. According to witnesses, officials did not help either of the men and the army fired again on protesters who were trying to help the wounded.

In Curicó, José Miguel Uribe was shot in the chest by a soldier and died. Minutes earlier, 25-year-old José Miguel had been at an improvised roadblock erected by young people in the area to stop traffic and put pressure on the authorities.  The military arrived and, without warning, opened fire on those present. According to witnesses, no uniformed official tried to help José Miguel even though they saw him collapse.

Alex Núñez, aged 39, died as a result of a vicious beating by police officers. Núñez was crossing a demonstration in order to make a delivery in Maipú, Santiago Metropolitan Region, when he was stopped by three police officers. They threw him to the ground and kicked him violently in the head and chest. He died the next day as a result of his head injuries.

To date, the Chilean Public Prosecutor's Office has recorded a total of 16 complaints of rape or sexual abuse by security forces, including the case of Josué Maureira, who was raped with a baton while in police custody. Several members of the national police inflicted injuries on his buttocks with a sharp object, beat him, kicked him and insulted him because of his sexual orientation.

In another case, police officers severely beat a demonstrator, causing irreversible loss of vision in one eye, fracturing his nose, dislocating his shoulder and breaking three ribs, resulting in a punctured lung. Twelve officials attacked him while he was demonstrating peacefully carrying a pan and a spoon in Ñuñoa Square in Santiago.

According to a medical report, Kevin Gómez, aged 24, died of a "thoracic lung injury caused by multiple projectiles" on 21 October in the city of Coquimbo. According to witnesses, a solider opened fire on Kevin with a shotgun, without warning and at close range, even though the young man was unarmed.

In one case, a 15-year-old girl at a peaceful gathering in the Cerrillos neighbourhood of the Santiago Metropolitan Region was hit by multiple pellets fired by a police officer from a moving police car. Pellets hit her in the left eye, forehead, shoulder and neck.

Amnesty found another report where a police officer fired a tear gas canister at 24-year-old Natalia Aravena as she was demonstrating peacefully - hitting her in the right eye. Natalia is one of dozens of people who have sustained severe eye damage from the impact of tear gas canisters and water cannon during demonstrations.

Crimes must be investigated under international law

Amnesty is calling on authorities in Chile to end the repression as a matter of urgency and ensure the use of lethal and potentially lethal weapons are never used as a deterrent. The human rights group is also calling on justice agencies to investigate the responsibility of those in command for the human rights violations and crimes under international law.