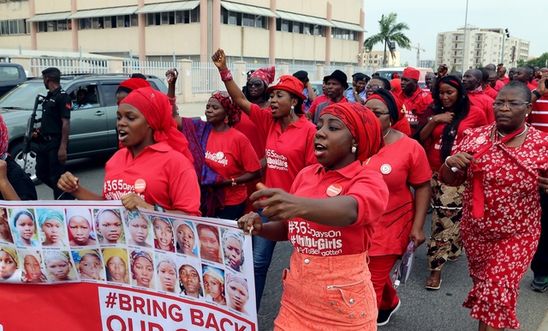 Nigerian authorities must ramp up efforts to secure the release of the remaining Chibok girls and thousands of others abducted across the northeast by Boko Haram, said Amnesty International on the third anniversary of the armed group’s chilling abduction of 276 Chibok schoolgirls.

“Boko Haram continues to abduct women, girls and young men who are often then subjected to horrific abuses, including rape, beatings and being forced into suicide bombing missions. Sadly, many such abductions go unnoticed and unreported by the media. This has left many parents and relatives without any hope of being reunited with their loved ones.

“These appalling abductions and other attacks, some of which constitute war crimes and crimes against humanity, are carried out by Boko Haram on an almost daily basis. They must stop. Today we remember and lend solidarity to the families of the Chibok girls as well as the thousands of other women, girls and men abducted, killed or displaced by Boko Haram.”

Amnesty International, which stands in solidarity with #BringBackOurGirls campaigners, is also urging the Nigerian government to ensure that all other abductees are accounted for and their families given adequate support.

The organisation has documented at least 41 other cases of mass abductions by Boko Haram since the beginning of 2014. While the Nigerian government is making considerable efforts to recover the 195 girls remaining in Boko Haram’s custody, victims of less-publicised mass abductions have not benefitted from similar support.

“The Nigerian government is making progress in recapturing territory held by Boko Haram but more needs to be done to prevent further abductions and bomb attacks and provide proper support to all those who have already been rescued or escaped Boko Haram captivity,” said Makmid Kamara.

“This bloody Boko Haram insurgency and the security forces’ efforts to end it, has displaced more than two million people across the north-east and brought many to the brink of starvation. It is vital for the Nigerian people that those responsible for atrocities in the conflict are brought to justice.”

Since 2009, Boko Haram has been carrying out a violent campaign against civilians in north-eastern Nigeria through almost daily killings, bombings, abductions and looting. Towns and villages have been pillaged. Schools, churches, mosques and other public buildings have been attacked and destroyed.

Boko Haram is brutally mistreating civilians trapped in areas under its control and has disrupted the provision of health, education and other public services.

In April 2014 Boko Haram fighters kidnapped 276 girls from the Government Girls Secondary School in Chibok. Abductions are a consistent part of Boko Haram’s attacks and on 14 April 2015, Amnesty International released a comprehensive report which documented 38 cases of abduction by Boko Haram.

Since April 2015, thousands of women, men and children who were abducted by Boko Haram have escaped or been rescued, but thousands more remain in captivity.