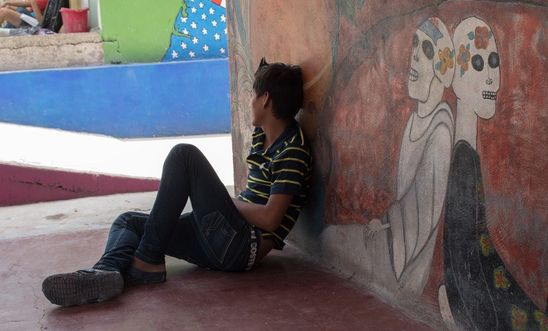 Lesbian, gay, bi and trans people from Central America are at risk at home and abroad © Sergio Ortiz/Amnesty International

‘I don’t want to be illegal. I just want to live and be safe’ - trans woman Cristel

‘Terrorised at home, and abused while trying to seek sanctuary abroad, they are now some of the most vulnerable refugees in the Americas’ - Erika Guevara-Rosas

The lives of lesbian, gay, bisexual, transgender and intersex people (LGBTI) from violence-ridden El Salvador, Guatemala and Honduras are at risk as the authorities in their countries fail to protect them, leaving them with no choice but to flee and face further dangers in Mexico, Amnesty International said in a new report today.

Amnesty’s report accuses the Mexican authorities of failing to protect vulnerable refugees from violations and abuses while travelling through the country, and also highlights abusive experiences during prolonged and systematic immigration detention in the USA.

Most refugees who spoke to Amnesty said constant discrimination and the levels of violence they’ve suffered in their countries - including physical attacks, financial extortion at the hands of criminal gangs and killings - made them feel they had no choice but to flee. Amnesty also shows how high levels of impunity and corruption in their home countries mean the authorities are unlikely to punish those responsible for crimes against LGBTI people, particularly when the security forces are responsible for the attacks.

According to the Honduran NGO Cattrachas, 275 LGBTI people were killed in the country between 2009 and 2017. In most cases, those responsible were never brought to justice. Carlos, from Honduras, was forced to flee to Mexico after he was attacked and threatened with death by a criminal gang for being gay. He told Amnesty:

“I never tried reporting [the abuse] because of what happened to some friends. As soon as a friend of mine reported the abuse, those who had committed it went to his house to get him. That’s why he ran away to Mexico. Another friend was killed right after he reported what had happened to him.”

El Salvador, Guatemala and Honduras have some of the world’s highest murder rates: 81.2 per 100,000 inhabitants in El Salvador, 58.9 in Honduras and 27.3 in Guatemala, according to official figures.

“People are facing vicious discrimination in Central America due to their gender identities, and have absolutely nowhere to run for safety.

“Terrorised at home, and abused while trying to seek sanctuary abroad, they are now some of the most vulnerable refugees in the Americas.

“The fact that Mexico and the USA are willing to watch on as they suffer extreme violence is, simply, criminal.

“The more the authorities in El Salvador, Honduras, Guatemala, Mexico and the USA fail to take action to protect some of the most vulnerable people in the Americas, the more blood they will have on their hands. These governments must urgently take decisive action to tackle the epidemic levels of violence against LGBTI people in the region and improve their policies and practices to ensure that all those who are in need of international protection can access it.”

Amnesty’s report shows how brutality suffered by LGBTI people in Central America does not end after they leave their countries of origin. Most of those interviewed for the report said they suffered further discrimination and violence, including at the hands of public officials, in Mexico, where high levels of violence against LGBTI people in general are reported. Many also said they didn’t feel safe in Mexico as many of the criminal gangs who’d threatened them at home operate across the southern Mexican border.

According to a study by the United Nations High Commissioner for Refugees, two-thirds of the LGBTI refugees from Central America they spoke to in 2016 and 2017 had suffered sexual and gender-based violence in Mexico. Several gay men and trans women also told Amnesty that they were never properly informed about their rights to seek asylum in Mexico, despite the extreme danger they would face if sent back to their own countries. They also said the Mexican authorities didn’t inform them of any progress regarding investigations after they reported having suffered human rights abuses there.

Trans women abused in the USA

A number of trans women who managed to survive the dangerous journey across Mexico and cross the border into the USA complained of the treatment they received in detention. Others were deported from the USA and Mexico and sent back to their countries, despite the dangers posed to them.

Cristel, a 25-year-old trans woman from El Salvador, told Amnesty she was held in solitary confinement in US immigration facilities as soon as she crossed the Mexican/US border in April this year. After a week, she was put in a small cell with eight men. She eventually failed to secure asylum and was returned to El Salvador, where criminal gangs continue to threaten her. Cristel told Amnesty: “I don’t want to be illegal. I just want to live and be safe.”