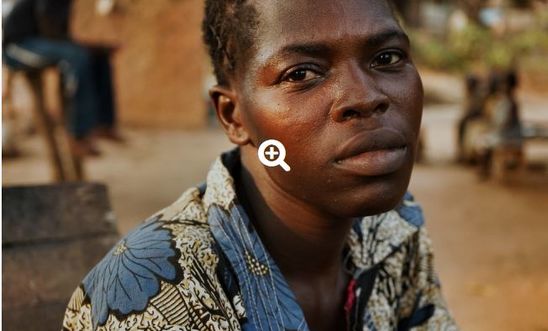 A survivor of the attack © Amnesty International

Dozens massacred, including two priests, as thousands sheltering at a Catholic mission left undefended during assault by an armed group

The United Nations must carry out a thorough investigation into the response by UN peacekeeping troops to an attack that killed as many as 100 civilians in a displaced persons camp in the Central African Republic, Amnesty International said in a new report today.

Amnesty’s report - ‘Everything Was In Flames’ - comes hours after the UN Security Council voted to renew the MINUSCA peacekeepers’ mandate for another year.

Amnesty’s report shows how the peacekeepers made no attempt to prevent an attack by an armed group last month, instead retreating in an armoured vehicle to a military base, leaving thousands of civilians unprotected at the camp in Alindao.

According to multiple eyewitnesses, at around 8-8.30am on 15 November, members of the Union for Peace in the Central African Republic (UPC) armed group attacked a displaced persons camp housing more than 18,000 people at Alindao’s Catholic mission. They fired mortars and rocket-propelled grenades, and then looted and burned the majority of the dwellings.

The UPC fighters were joined by armed Muslim civilians from Alindao and surrounding villages. These were reportedly angered by previous killings of Muslims in the area, including the murder of a motorcycle-taxi driver that morning.

Amnesty interviewed 20 survivors, many of whom described how Mauritanian MINUSCA peacekeepers stationed at the site failed to respond to the attack. Rather than defend vulnerable civilians, even by firing warning shots, the UN troops retreated to their main base at the site. By the time the attackers finished plundering and burning toward the end of the day, at least 70 civilians had been killed - with some sources estimating a total of nearly 100 dead - and around 18,000 displaced people had been forced to flee again.

The dead included women, children, older people and those with disabilities.

Georgette, whose family had been forced to flee her home in Alindao’s Bangui-ville neighbourhood the previous year, lost her mother and her eight-year-old daughter when attackers broke down the door to their home and shot them. Her mother, Marie, age about 65, died on the spot; her daughter, Natasha, died ten days later at the hospital in Bambari.

Older people and people with disabilities were particularly vulnerable, and were killed in large numbers when they were unable to escape the attack. Many were burned alive in their shelters, which were made of wooden poles and extremely combustible dried vegetation.

The attackers also killed two Catholic priests - Prospère Blaise Mada and Célestin Ngoumbango. While Amnesty has been unable to confirm whether they were purposefully targeted as priests, witnesses said they were wearing their cassocks when killed.

UPC fighters and their accomplices then looted and burnt down nearly all the shelters on the site and emptied a World Food Programme storehouse. Amnesty has reviewed satellite imagery clearly indicating the area that had been burnt.

MINUSCA have told Amnesty that the small number of peacekeepers meant it would have been impossible for them to contain the violence. However, the UN forces had armoured vehicles and heavy weapons, and UN troops could have taken defensive positions that might have deterred the attack, particularly had they fired warning shots.

Amnesty supports MINUSCA’s presence in the Central African Republic, recognising that the peacekeeping force have saved countless lives. However, Amnesty is calling on the international community to ensure that UN peacekeepers in the country are adequately trained and equipped to deliver their mandate.

“While UN troops were badly outnumbered by armed attackers, their actions - both before and during the attack - raise serious questions as to whether they lived up to their mandate to protect civilians.

“The United Nations needs to assess whether the massacre at Alindao was preventable, and, most importantly, what it can do to ensure that future violent attacks on civilians are deterred or contained.”

Numerous former residents have told Amnesty that the Mauritanian peacekeepers based at Alindao since May have failed to control the area or prevent the entry of armed fighters. In contrast to Burundian MINUSCA contingents previously based there, they have rarely carried out patrols, delegating much of their duties to a small “security team” of fighters from a local militia. MINUSCA has denied its forces allowed the militia to operate at Alindao.

Since the 15 November attack, Mauritanian peacekeepers have been joined by a contingent of Rwandan troops.

The threat of further attacks against displaced civilians looms large elsewhere in the country. On 4 December, UPC fighters reportedly attacked another site for displaced people run by the Catholic church in Ippy, resulting in the deaths of two children. Eyewitnesses told Amnesty that Mauritanian MINUSCA peacekeepers were present at the time, but failed to prevent the attack.

Amnesty’s report is calling for MINUSCA to ensure that adequate military forces with appropriate equipment carry out robust patrols in several high-risk areas of the country, including Bambari, Batangafo, Alindao, Ippy and Bangassou.