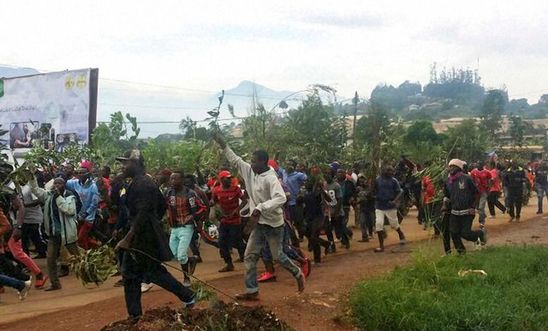 Security forces have tortured people, including children, by beating, electrocuting and burning

“They beat us with shovels, hammers, planks, and cables, kicked us with their boots and poured hot water on us” – Torture victim

The spiral of violence in Cameroon’s Anglophone regions is becoming increasingly deadly and urgent, Amnesty International said today (12 June), as it released a new report detailing the human rights crisis pervading the North West and South West regions of the country.

Amnesty’s report, ‘A turn for the worse: violence and human rights violations in Anglophone Cameroon’, is based on in-depth interviews with more than 150 victims and eye-witnesses to the violence that has taken place in the country since September last year, when large-scale protests across the Anglophone regions to symbolically proclaim the independence of a new state of “Ambazonia” were met with unlawful and excessive force by the Cameroonian authorities.

The research reveals how the Cameroonian security forces have tortured people, fired on crowds and destroyed villages, whilst armed separatists in Cameroon’s Anglophone regions have stabbed to death and shot military personnel, burned down schools and attacked teachers. Key facts in the report show that:

“People in Cameroon’s Anglophone regions are in the grip of a deadly cycle of violence. Security forces have indiscriminately killed, arrested and tortured people during military operations which have also displaced thousands of civilians. Their heavy-handed response will do nothing to calm the violence - in fact it is likely to further alienate Anglophone communities and fuel further unrest.

“For their part, armed separatists have killed dozens of members of the security forces. They also carried out attacks designed to strike fear amongst the population, going as far as burning down schools and targeting teachers who did not enforce the boycott.”

Torture and killings by the military

Cameroon’s military has responded to protests with arbitrary arrests, torture, unlawful killings and destruction of property. In one incident, satellite images and other photographic evidence obtained by Amnesty show the complete destruction of the village of Kwakwa, which was burned to the ground by Cameroonian security forces following an operation conducted in December in connection with the killing of two paramilitary officers by suspected armed separatists.

In some incidents following these security operations, people were arbitrarily arrested and tortured while secretly held in illegal detention facilities. At least 23 people, including children, were arrested by the security forces in the village of Dadi on 13 December, where they spent three days in incommunicado detention. Some of those who were detained told Amnesty that security forces tortured them to extract “confessions” that they had supported the separatists.

Victims told Amnesty that they were blindfolded and severely beaten with various objects, including sticks, ropes, wires and guns, as well as being electrocuted and burnt with hot water. Some were beaten until they lost consciousness at least one person died in custody.

One man, who was arrested on 13 December in Dadi, gave a harrowing account of the torture he suffered:

“… They tied our hands behind our backs, gagged us and tied our faces with our towels and shorts, which they tore. They, then made us lie in the water, face down for about 45 minutes…During three days, they beat us with shovels, hammers, planks, and cables, kicked us with their boots and poured hot water on us… when I tried to move and shouted, one of them used the cigarette he was smoking to burn me.”

Amnesty also received information about numerous instances of deaths in custody. On 3 February this year, the bodies of four men, who had been arrested in the town of Belo by security forces the day before, were found at the Bamenda Regional Hospital mortuary, bloodied and showing signs of torture. There is also evidence of unlawful killings, including during three security operations conducted by the army in the villages of Dadi, Kajifu and Bodam (South-West region) in December.

Attacks on schools and teachers by separatists

At least 42 schools have been attacked by armed separatists between February 2017 and May 2018. These attacks are part of a targeting of teachers and students who have not participated in a boycott of schools that have appointed French-speaking teachers. Many perceive these appointments to be a symbol of how the English language and cultures in the Anglophone regions have been marginalised by the authorities.

On 30 January 2018, a masked gunman, suspected to be a member of an armed separatist group, stormed the Government Primary School in Ntungfe (North-West region). Armed with a locally-made gun, he shot one teacher in the legs, and set fire to a motorbike before escaping. Photos taken by Amnesty reveal the extent of the teacher’s wounds.

The teacher told Amnesty: “The assailant […] told me that I was still coming to school in defiance of calls for a schools boycott. […] He then asked me to raise my hands, but before I could do so, he shot me. I fell to the ground…”

Between September 2017 and May 2018, at least 44 members of the security forces were killed in attacks at checkpoints, in the streets, or at their duty stations in both the North-West and South-West regions.

During one attack on 1 February 2018 in the locality of Mbingo (North-West region), two paramilitary personnel were stabbed to death at a checkpoint by a group of young separatists armed with knives and machetes.

Amnesty has also documented five attacks on traditional chiefs, who were accused by separatists of sympathising with the government.

“The armed separatists’ repeated targeting of the general population demonstrates a total disregard for human life and is another example of the threat faced by people in the Anglophone regions.

“Authorities must ensure accountability for crimes committed by the security forces as well as by the armed separatists. They must immediately end the use of unlawful, unnecessary and excessive force and ensure that people are protected.”

Since late 2016, Cameroon’s Anglophone regions - where grievances date back to the early 1960s - have endured turmoil and violence in what has become an urgent human rights crisis. Between 22 September and 1 October 2017, large-scale protests organised across the Anglophone regions to symbolically proclaim the independence of a new state of “Ambazonia” were met with unlawful and excessive force by the Cameroonian authorities. Since then, violence has been escalating, as the rise of armed separatist attacks have coincided with the militarisation of the Anglophone regions.