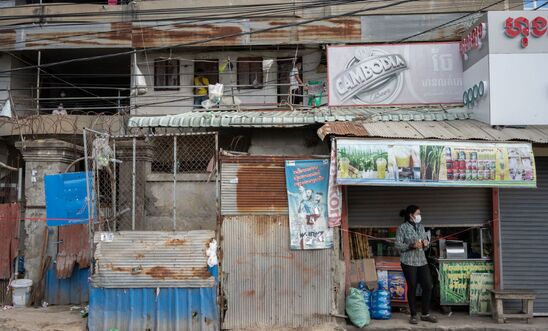 Since 19 April, a strict lockdown has been put in place in parts of the capital, Phnom Penh, and other cities across the country. On 26 April, the lockdown was further extended to 5 May.

The government has designated areas where there is an especially severe COVID-19 outbreak as “red zones”. People in red zones have been prohibited from leaving their homes even to buy food and other basic necessities.

Markets in red zones have been closed and mobile food vendors barred, leaving many at-risk residents to go hungry. Some households within these zones have been under lockdown since 9 April.

Amnesty has received alarming reports that even humanitarian NGOs have been barred from distributing food and other essential aid within red zones, despite the urgent needs of at-risk residents.

“The Cambodian government’s outrageous mishandling of this COVID-19 lockdown is causing untold suffering and sweeping human rights violations across the country.

“Right now, residents of ‘red zones’ and others in Cambodia are going hungry because of fundamentally unreasonable policies. The Cambodian authorities need to urgently change course by working with NGOs and UN agencies to facilitate humanitarian access to red zones. Everyone under lockdown must be provided access to adequate food, water, health care and other essential items.

“Millions of people in Cambodia are already suffering serious economic hardship after a year of the pandemic. For many, this mismanaged lockdown has brought them to the precipice of a humanitarian crisis, too.

“The Cambodian government can, and must, take decisive steps to mitigate this disaster.”

Many residents, including those with young children and older family members, have voiced desperation as their food supplies have begun to run out. With markets closed and mobile food vendors barred from selling essentials, many are unable to access the basic necessities they require to survive.

Amnesty’s Crisis Evidence Lab reviewed 23 Facebook posts and videos posted from areas under lockdown. The organisation has verified multiple videos showing residents making desperate pleas for assistance within red zones, and others in which local residents can be seen pleading with police for help.

Amnesty is concerned that people under lockdown who have sought to voice their concerns publicly have faced reprisals and threats. Amnesty has also received alarming reports that some individuals who posted their concerns and pleas for help on Facebook have been threatened and intimidated by local authorities.

Some residents who are running out of food have engaged in spontaneous and localised protests against the measures around Phnom Penh. On 20 April, Prime Minister Hun Sen warned residents in a speech that the government could deny them food aid if they continue protesting and voicing their concerns.

On 18 April, Phnom Penh City Hall created a Telegram group to coordinate emergency food requests. By 24 April, the group had reached 48,000 members where people shared thousands of messages with pleas for food and support.  The Phnom Penh authorities have sporadically disabled messaging in the group, apparently in response to the overwhelming number of pleas for help by residents.

Individuals undertaking mandatory 14-day home quarantine as a result of being in contact with people who tested positive for COVID-19 have also spoken about the desperate circumstances they are facing.

One out-of-work construction worker under quarantine in Phnom Penh posted a picture of himself with his infant child on Facebook on 19 April, pleading for help because his family have “no work, no money, no food… Pity the little baby with no milk”.

Yamini Mishra said: “Rather than retaliating against desperate residents for voicing their concerns, the Cambodian authorities need to focus on facilitating access to essential aid and services to those in need.

“The Cambodian government’s threats and reprisals are seriously exacerbating an already desperate situation. Simple measures, such as enabling mobile food vendors to operate in line with COVID-19 safety measures, could have a massive impact.

“It is also imperative that the UN Resident Coordinator and UN Country Team proactively make every effort to seek approval to deliver emergency assistance to those in need, including in red zones.”

Inadequate distribution of food and essentials

Plans for a government cash distribution initiative aimed at households living in the most extreme poverty were abruptly cancelled last week. Meanwhile, efforts made by the government to provide food aid have been haphazard and inadequate, and marred by reports of discriminatory distribution affecting individuals who are perceived to be critics of the ruling Cambodian People’s Party (CPP).

The Ministry of Commerce has launched an online shop promoting the sale of a limited selection of slightly-discounted products for people in red zones. Many of the products are linked to the business interests of senior members of the CPP. This online shop is the only source of food delivery for residents in red zones, many of whom live below the poverty line and cannot afford the products.

Yamini Mishra added:  “COVID-19 restrictions and lockdowns can play an important role in safeguarding the right to health. However, restrictions must be carefully crafted and implemented with the minimum impact on human rights and pay special attention to the needs of marginalised groups.

“Cambodia’s lockdown restrictions must be coupled with a major ramping up of social protection measures and humanitarian assistance. People with no access to food cannot stay home indefinitely.”

Cambodia has struggled to contain a third wave of COVID-19 having previously avoided a major outbreak since the beginning of the pandemic. A significant outbreak occurred in late February after a group of tourists reportedly bribed their way out of mandatory hotel quarantine.

According to the United Nations, poverty is forecast to almost double in Cambodia as a result of the COVID-19 pandemic, affecting up to 17.6 per cent of the population. The country has a poorly developed social security infrastructure, leaving those whose income is disrupted, including workers in the garment sector and informal workers, in precarious economic situations.