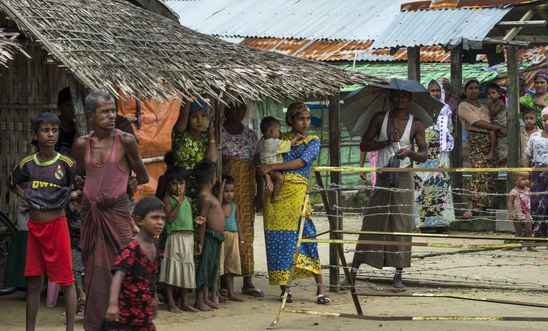 The Burmese authorities’ restrictions on international aid reaching Rakhine State is putting tens of thousands of lives at risk in a region where mainly Rohingya people are already suffering horrific abuses from a devastating military campaign, Amnesty International said today.

Aid workers have told Amnesty of an increasingly desperate humanitarian situation in Rakhine, where the military has been engaged in a large-scale operation since attacks on dozens of security posts on 25 August, attacks claimed by the armed group Arakan Rohingya Salvation Army.

“Rakhine State is on the precipice of a humanitarian disaster. Nothing can justify denying life-saving aid to desperate people. By blocking access for humanitarian organisations, Burma’s authorities have put tens of thousands of people at risk and shown a callous disregard for human life.

“These restrictions will affect all communities in Rakhine State. The government must immediately change course and allow humanitarian organisations full and unfettered access to all parts of the state to assist people in need.”

Aid activities have been suspended in the northern part of Rakhine for the last week, while in other parts authorities are denying humanitarian groups access to communities in need, predominantly people from the Rohingya minority. According to humanitarian workers, restrictions on their activities and access began in early August but has deteriorated significantly since the 25 August attacks.

Tens of thousands of people have been forced to flee from their homes since the violence began. According to latest UN estimates, more than 90,000 Rohingya refugees have crossed the border into Bangladesh, while the Burma government has evacuated more than 11,000 people belonging to other ethnic minority communities living in northern Rakhine State.

Thousands of people – mostly Rohingya – are believed to be stranded in the mountains of northern Rakhine, where the UN and international NGOs are unable to assess their needs or to provide shelter, food and protection.

“The Muslims are starving in their homes. Markets are closed and people can’t leave their villages, except to flee. There is widespread intimidation by the authorities, who are clearly using food and water as a weapon.”

Rohingya refugees who have fled into Bangladesh have spoken of witnessing horrific abuses by the Burma security forces, including killings of people trying to flee and burning of entire villages.

In late 2016, the Burmese army launched a vicious campaign in response to an attack by Rohingya militants. At the time, Amnesty documented violations by the army including rapes, killings, torture and burning of villages, which may have amounted to crimes against humanity.

“The Burmese military has responded to the militant attacks in a completely disproportionate way. Its campaign of violence is again targeting ordinary Rohingya people on the basis of their ethnicity and religion, and must end immediately.

“The Burmese authorities are obliged under international law to treat all those living in Rakhine State, including the Rohingya, without discrimination. Instead they have chosen to treat a whole population as an enemy which may be attacked, killed, deprived of homes and uprooted indiscriminately.”

The government has further exacerbated the situation by accusing international humanitarian workers of supporting the Rohingya armed group, after NGO-branded food items were found in an alleged militant camp in northern Rakhine State.

“The accusation that international humanitarian organisations are supporting armed actors in Rakhine State is both reckless and irresponsible. Humanitarian workers have for decades supported the Burmese people, providing aid and assistance in times of need, and often when the government has been unable to do so itself.