Brazil: Human rights under threat ahead of the World Cup 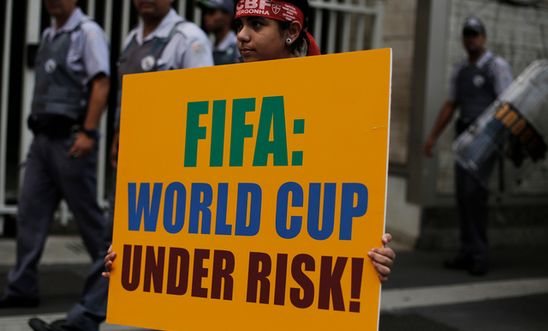 A soccer fan holds a banner next to military police officers during a protest against corruption in the football, in Sao Paulo © REUTERS/Nacho Doce

The rights to freedom of expression and peaceful protest are under threat in Brazil, said Amnesty International today, two months ahead of the start of the 2014 Football World Cup.

The Brazilian government is currently attempting to push draconian “anti-terror” laws through parliament, a move which signals their intention to crackdown on any peaceful protests in the country.

Amnesty has been monitoring events in the run up to the World Cup. Issues include:

“The excessive use of force by Brazilian police in response to the widespread protests last year resulted in many people injured. Rather than training the police in how to deal with peaceful mass protests, the government’s response has been to criminalize protesters, giving the security services carte blanche to arrest and detain people at will. New laws have been proposed that threaten the right to freedom of expression. This is not just about the World Cup but will have long-term consequences for any future peaceful protests.”