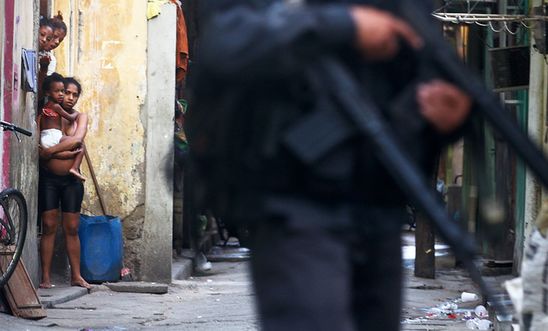 “A shadow of death has set over Rio de Janeiro and it seems the authorities only care about how pretty the Olympic Park looks.” Atila Roque

A shocking 103% increase in police killings in Rio de Janeiro between April and June of 2016 in comparison to the same period last year has shattered any chance of a positive legacy to the Rio de Janeiro Olympic Games, said Amnesty International three days before the opening ceremony.

According to the Institute for Public Security of the State of Rio de Janeiro, police in the city killed 49 people in June 2016, 40 in May and 35 in April – more than one every single day.

Since 2009, when Rio won the bid to host the Olympic Games, police have killed more than
2,600 people in the city.

“Just when we thought the levels of police brutality could not get any more shocking, they do. Brazil has lost the Olympics even before they started.

“The seemingly unstoppable rise in killings by the police has put any chance of a positive Olympic legacy in the area of public security in serious doubt.

“A shadow of death has set over Rio de Janeiro and it seems the authorities only care about how pretty the Olympic Park looks. The time for promises and empty speeches is over. The Brazilian authorities must urgently take serious action to prevent further human rights violations and bring those responsible for so much pain to justice.

“The lack of clear protocols to control the use of lethal force by the police and an utterly misguided public security approach are making Brazil repeat the failures of the 2014 World Cup. Then police killings increased by 40% in the state of Rio de Janeiro alone and the authorities have done little to change course.

“The responsibility must be shared with the State Prosecution office, who is in charge of controlling the police activity and to present charges on cases of killings committed by the police.”

Amnesty today also released the first monthly report for the collaborative app CrossFire. The app, launched on 5 July, gathers reports from people living in the city of Rio de Janeiro of gun shootings and armed violence.

In July alone, people reported 756 shootings with 51 fatal victims via the app. The notifications are featured in a collaborative map at www.fogocruzado.org.br. The app already has more than 35.000 downloads.

Since the app was launched, in some favelas, including Complexo do Alemão and Caxias (Baixada Fluminense), there have been nearly daily reports of shootings by criminals operating in the area and the police. In the Complexo da Maré, there were also many reports of gun violence. These communities sit between Rio de Janeiro’s international airport and the Olympic venues.

“The CrossFire app puts into a map what thousands of people suffer every single day in communities across Rio de Janeiro. It is time for the Brazilian authorities to take real action by moving away from focusing on heavily armed police operations and instead promote public security policies aimed at protecting everybody.

“It also shows that the authorities in Brazil, as well as the Olympic organisers, are clearly failing to deliver the promised legacy of public security and a safe city for all.”

In early June, Amnesty published the report “Violence has no place in these Games”, detailing how a mega sporting event such as the Olympic Games increases risks of human rights violations.

Last week, more than 120,000 signatures from more than 15 countries were delivered to the Rio 2016 Local Organizing Committee calling for a public security policy that respects and protects human rights.