Brazil: Authorities must prosecute those responsible for destruction of Amazon 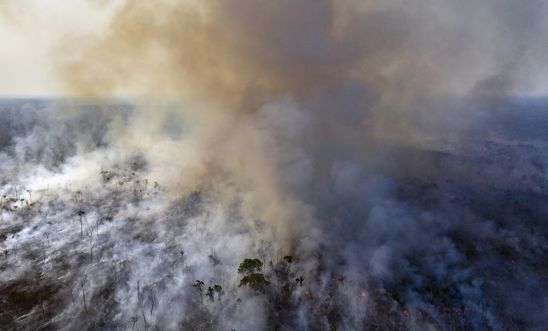 The Brazilian authorities must investigate and prosecute those responsible for starting illegal fires in the Amazon to prevent further destruction of the rainforest, Amnesty International said today, as it launched an online campaign calling on President Jair Bolsonaro’s government to step up protection of Indigenous territories.

“The Brazilian authorities must immediately investigate and prosecute those responsible for these catastrophic fires, otherwise we will inevitably see them getting worse throughout the rest of President Bolsonaro’s time in office.

“The devastating fires in the Amazon are the symptom of a larger crisis of illegal deforestation and land seizures. On paper, Brazil has strong laws to protect Indigenous territories and environmental reserves. Yet President Bolsonaro has actively undermined those protections, resulting in the devastation we see today.

“While the President has now signed a decree temporarily banning fires for land clearance, this does not eliminate the potential for further fires because he has taken little action to deter or prevent the illegal deforestation and land seizures that drive them.

“This is both a human rights crisis and an environmental crisis.

“Over the long term, strengthening the civilian authorities responsible for combatting deforestation and illegal land seizures is the only way forward.”

Too little too late

On 29 August, President Bolsonaro enacted a decree prohibiting land clearance fires for 60 days as part of the government’s response to the crisis. However, one official working for Brazil’s national environmental agency who spoke to Amnesty on the condition of anonymity, told us he feared the decree will likely have limited effect because most of the recent fires were already prohibited by existing laws.

According to representatives of NGOs and local officials, the people starting the fires are often individuals who are encouraged to occupy plots of land in Indigenous territories and environmental reserves by local farmers and politicians.

The conversion of forests into pasture in the Amazon often follows a pattern, where plots of land are identified and illegally seized, trees are cut down and cleared, then fires are lit (often repeatedly in the same area) before grass is planted and cattle eventually introduced.

On 23 August, Amnesty witnessed a fire raging in the Indigenous territory Manoki, in Mato Grosso state.The burning area of the forest had been fenced off and Manoki leaders told Amnesty that they expected the fire was intended to make pasture for grazing cattle.

Call for Brazil’s government to enforce and fund existing protections

Experts and Indigenous people interviewed by Amnesty expressed intense frustration at the lack of enforcement of Brazil’s laws to protect Indigenous territories and environmentally-protected areas. They also told Amnesty that government surveillance operations to monitor and prevent illegal land seizures and deforestation have been reduced because of budget constraints over recent months.

In the four Indigenous territories Amnesty visited, the rate of deforestation is almost 80% higher than over the same period in 2018. In some sites, Indigenous community leaders also reported receiving death threats for defending their traditional territories.

An official working for Brazil’s national environmental agency in Rondônia state, who spoke to Amnesty on the condition of anonymity, explained: “If we had had people to conduct inspections, the situation would have not reached this level.”

“IBAMA has stopped coming. I don’t know why. We’ve prepared reports, marking the coordinates where illegal logging is taking place and sending them to IBAMA. But now they have stopped [coming].”

Brazil's National Indian Foundation (FUNAI) and its main environmental agency (IBAMA) face substantial budget cuts this year. According to government data, FUNAI's expenses for the protection of Indigenous territories incurred this year until 28 August have fallen 10% over the same period in 2018. International media have reported that IBAMA’s overall budget has shrunk by 25%.