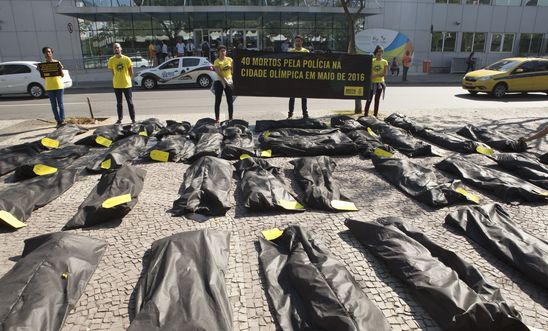 Forty body bags, representing the number of people killed by the police in May 2016 in Rio de Janeiro were displayed in front of the Local Organising Committee for the Rio 2016 Olympics by Amnesty International’s activists in a high-profile protest today.

The activists also delivered a petition signed by 120,000 people from more than 15 countries demanding public security policies that respect human rights during the Rio 2016 Olympic Games.

“The Local Organising Committee is in charge of the Olympics and bears shared responsibility for the security operations and consequent human rights violations committed by agents of the state linked to the Olympics.

“It is part of the Local Organising Committee’s mandate to ensure that security practices are aligned with the Olympic values of friendship, respect and excellence and that international protocols on the use of force and on human rights are fully respected.”

Since April, Amnesty has been raising concerns around the increased risk of human rights violations the context of the Rio 2016 Olympics after abuses were documented in relation to the 2014 World Cup and the 2007 Pan American Games, both staged in the country. Since 2009, when Rio won the bid to host the Olympics, more than 2,600 people have been killed by the police in the city.