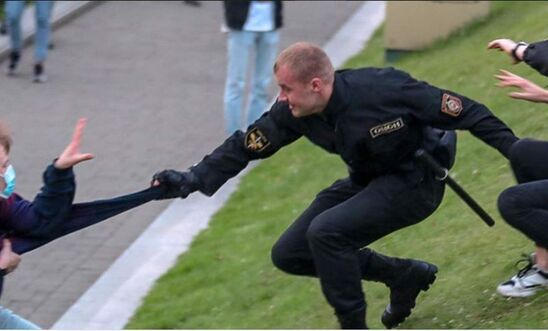 The authorities in Belarus have attempted to cover up the police killing of a peaceful protester by bringing serious criminal charges against a key witness, Amnesty International said today.

On 11 August, Henadz Shutau and his friend Alyaksandr Kardyukou were approached by three plain-clothed police officers after a peaceful rally in the western city of Brest. Official footage  from media outlet MediaZona shows that less than a minute later, Shutau was shot in the back of his head. He died on 19 August.

Kardyukou ran from the scene and has since been charged with the attempted murder of a police officer, which carries a maximum sentence of life in prison.

More than 1,000 people have been unlawfully prosecuted for their political views in Belarus in an ongoing crackdown against peaceful protesters following the disputed re-election of President Alyaksandr Lukashenka this August.

“There is no evidence that Alyaksandr Kardyukou participated in or advocated for violent activities. He is a prisoner of conscience being prosecuted solely for the peaceful exercise of his human rights. He must be immediately and unconditionally released.

“Belarus is facing its most serious human rights crisis in its post-independence history.

“Those responsible must be brought to justice in fair trials and victims and their families must be granted justice and effective remedies.”

Shot in the back of the head

The Belarusian Ministry of Interior has claimed that “a group of aggressive citizens armed with metal bars assaulted the police officers. They were not deterred by warning shots. The officers used firearms to defend their lives and health.”

However, these claims contradict video footage, witness accounts and medical records obtained by Amnesty which show Henadz Shutau was shot from behind.

Shutau's daughter, Anastasiya Baranchuk, told Amnesty that witness reported one of the police officers had asked the men who they had voted for in the election. Her father answered: “For [Svyatlana] Tsikhanouskaya”, the opposition candidate.

According to Baranchuk, her father was then told to kneel and lie down on the floor. As soon as he kneeled, an officer hit him on the forehead with a gun and then shot him in the back of his head. Witnesses reported hearing a total of three shots.

Henadz Shutau’s family has demanded an investigation into his killing. However, on 3 September, the Investigative Committee, a stand-alone government agency for investigation of serious crimes, sent them a letter stating that there were “insufficient grounds for opening a criminal investigation under Article 139”.

Local and international human rights organisations have collected hundreds of testimonies from detainees who have been subjected to torture and other ill-treatment during the mass protests. To date not a single investigation has been opened by the Belarusian authorities against law enforcement officers.

- Natallia Hersche, 51, sentenced to two-and-a-half years in prison on 7 December for resisting arrest and removing a balaclava from a riot police officer

- Maksim Pauliushchyk, jailed for two years on 8 December for spray-painting “We Will Not Forget” on a pavement

- Stefan Lazavik, 27, sentenced to 12 months in prison on 1 December for spray-painting a slogan allegedly insulting President Lukashenka on a bus shelter