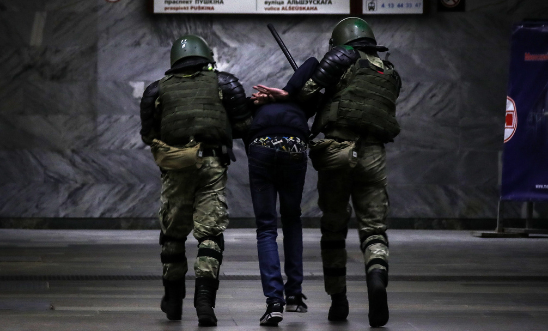 At least 12 civil society figures detained, with whereabouts of others unknown

Amnesty international has condemned a wave of raids of civil society organisations in Belarus today.

Early this morning, law-enforcement officers broke into and searched the offices of at least a dozen Belarusian civil society and human rights organisations and opposition groups, as well the homes of civil society leaders.

According to Vyasna, at least 12 people have been detained, including one of Vyasna’s leaders, Valyantsyn Stefanovich, and his colleagues Uladzimir Labkovich, Alena Liptsyonak, Andrey Palyuda, Aleg Matskevich, Igar Kazmerchak, Viktar Sazonau and Maryna Statkevich. The whereabouts of Vyasna founder and former prisoner of conscience, Ales Byalyatski, was unknown at the time of writing.

Belarusian law-enforcement agencies have given no reason for the raids. According to Vyasna, searches were conducted by officials from the Department of Financial Investigations of the State Control Committee.

In March, the Belarusian Investigative Committee opened a criminal case into the activities of Vyasna under Article 342 of the Criminal Code (“organisation and active participation in group actions that grossly violate public order”).

“The Belarusian KGB boasted last week that it was conducting a country-wide operation to ‘cleanse radicals’ and today we have seen what this looks like on the ground.

“All those detained today must be released immediately, and this campaign against civil society must end.

“Over the past 12 months, human rights have been under relentless attack from the government of Alyaksandr Lukashenka.

“We reiterate our message to the international community: civil society is being wiped out in the heart of Europe.

“Today’s massive attack on vital civil society organisations shows that nowhere near enough has been done to end this crisis.”