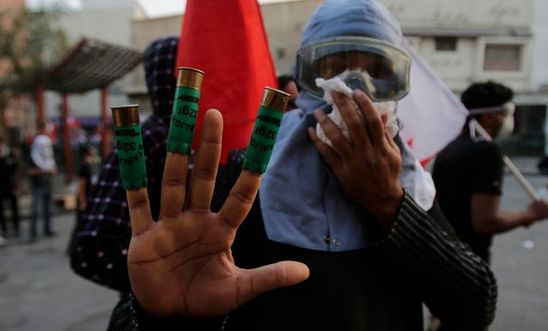 Protests continue in Bahrain, as does the use of excessive force by the country's security forces © AP/Hasan Jamali

The two bodies - the Ombudsman of the Ministry of Interior and the Special Investigations Unit within the Public Prosecution Office, both of which receive training and capacity building support from the UK (see below), a staunch ally of Bahrain - were established in 2012 in the wake of the Bahraini government’s brutal crackdown on protests the previous year. The crackdown saw the ruthless suppression of mass pro-reform demonstrations, when security forces killed at least 30 peaceful protesters and detained and tortured dozens of others.

Despite serious ongoing concerns about its poor human rights record, Bahrain has continued to enjoy considerable support from the UK Government, which has repeatedly asserted that all torture allegations in Bahrain are independently investigated by the Ombudsman and the Special Investigations Unit, assertions apparently designed to deflect criticism of Bahrain’s human rights record in the United Nations and other international forums. Last year, the then Foreign Secretary Philip Hammond claimed that Bahrain had been “making significant reform”, telling the House of Commons that it “is a country which is travelling in the right direction.”

Amnesty’s 55-page report - based on more than 90 interviews conducted with victims of human rights violations, their families and lawyers - acknowledges that the two institutions have achieved some measure of success.

On one side, said Amnesty, the Ombudsman’s office has generally been effective in referring complaints of torture and other serious human rights violations for investigation by the Special Investigations Unit. However, in some cases, it has failed to take prompt action to protect detainees from torture or to effectively investigate their allegations or ensure their access to medical care. For example, despite warnings from Amnesty that Hussain Jawad, a Bahraini human rights activist, was at risk of torture upon his arrest in February last year, the Ombudsman’s office failed to carry out a prompt visit to check the conditions of his detention and ensure he was not at risk of torture. He later said he was blindfolded, beaten with his hands cuffed behind his back, and threatened with sexual abuse in order to extract a “confession”.

The Ombudsman’s office also delayed for two years an investigation into the torture allegations of Mohamed Ramadhan, an airport security guard sentenced to death after being convicted of being involved in a bomb attack, despite receiving infromation from the family and an international NGO.

Meanwhile, while the Special Investigations Unit has made some progress on accountability and prosecuted 93 members of the security forces, only 15 low-ranking officials have been convicted. No senior officers or officials who oversaw the serious human rights violations during the 2011 uprising have ever faced prosecution. The vast majority of alleged cases of torture and other ill-treatment, deaths in custody and unlawful killings have not even been referred to trial by the Special Investigations Unit.

Out of nearly 200 cases since the 2011 uprising recorded by Amnesty, fewer than 45 have been referred to trial. One of those cases is that of Ali Hussein Neama, a 16-year-old boy shot dead by police in September 2012. Although photographic evidence and his death certificate indicate that he was shot in the back, the Special Investigations Unit concluded the officer who shot him had acted in self-defence and should not face prosecution, arguing that the boy and another child had thrown Molotov cocktails. In another case, the journalist Nazeeha Saeed described how she was beaten, kicked and subjected to electric shocks during her interrogation by security forces in May 2011. Three years later, the Special Investigations Unit took her back to the same room where she’d been tortured to identify her torturers, leaving her traumatised once again. Despite the fact she identified five suspected perpetrators, no-one was held accountable and the case was closed due to a “lack of evidence”.

Amnesty pointed out that both the Ombudsman and the Special Investigations Unit have failed to gain the public’s trust, partly as a result of a perceived lack of independence and impartiality. Both are viewed as being too close to the Ministry of Interior and other Bahraini governmental institutions, and have failed to keep families and victims adequately informed of progress in their investigations.

“Five years after Bahrain’s shocking crackdown on protesters its peaceful human rights activists are still being jailed after unfair trials, yet to listen to UK ministers one would think the country had long ago turned a corner and put these human rights abuses behind it.

“It was a welcome move when Bahrain set up these two bodies back in 2012 but it’s utterly disingenuous of the UK Government to pretend they’re delivering substantial human rights reform in Bahrain.

“Instead of acting as over-excited cheerleaders for Bahrain’s woefully inadequate reforms, UK ministers ought to be confronting the awkward reality that these UK-backed institutions are seriously flawed and widely seen as a PR tool of the Bahraini authorities.”

The Foreign and Commonwealth Office has argued that “UK support to Bahrain’s reform programme is the most constructive way to achieve long-lasting and sustainable reform in Bahrain”, while also saying that “Bahrain had, and continues to have, capacity and capability problems”. The UK has also devoted energy and resources to promoting the Ombudsman, the Special Investigations Unit and other Bahraini human rights institutions in official statements and reports, and through social media. For example, in September last year the UK sent a team of diplomats and advisers from its Bahrain capacity building programme to brief other states’ representatives ahead of a UN Human Rights Council vote on a draft statement that aimed to express serious concerns about the human rights situation in Bahrain. The FCO said the purpose was to “inform and discuss Bahrain’s progress on reform and human rights with a focus on the UK’s programme of assistance”, but it appears to have contributed to weakening the reference to human rights violations in the final joint statement and to some countries not signing up to the statement.

The Bahraini authorities have continued to clamp down on freedom of expression and jail peaceful critics and human rights activists, the majority of whom have been convicted after unfair trials. People have been jailed for peacefully criticising Bahrain’s king, Hamad ibn Isa Al Khalifa, as well as for making critical remarks about the Saudi Arabia-led air strikes in the conflict in Yemen, a conflict to which Bahrain is a party.

The authorities have also placed severe restrictions on the right of Bahrainis to participate in demonstrations and others forms of peaceful assembly. There is an indefinite ban on all public demonstrations in the capital Manama. The security forces regularly disperse unauthorised protests - which mostly occur in Shia villages, with protesters demanding the release of political prisoners - sometimes using excessive force, including tear gas and shotgun pellets. In addition, the country’s main opposition party, Al Wefaq, has been forcibly dissolved and its leader jailed. Other opposition leaders, including some imprisoned in 2011, continue to languish in jail.

In response to an international outcry over Bahrain’s 2011 crackdown, King Hamad bin Isa Al Khalifa established the Bahrain Independent Commission of Inquiry - composed of international jurists and human rights specialists - to investigate unlawful killings, torture and other human rights violations by the security forces. In November 2011, the king accepted the inquiry’s published findings, and committed the government to full implementation of its recommendations, earning wide international praise.

The commission’s 26 recommendations called for further investigations into the violations committed by the security forces during the protests, for those suspected of being responsible to be brought to justice, and for legal and institutional reforms to prevent future violations. In response, the government amended some laws, and in 2012 and 2013 created new human rights mechanisms mandated to investigate alleged human rights violations by state agents, and ensure accountability. These included the Ombudsman of the Ministry of Interior, a separate Ombudsman within the National Security Agency, the Special Investigations Unit within the Public Prosecution Office and the Prisoners and Detainees Rights Commission. In 2014 the government also overhauled the largely ineffective National Institution for Human Rights established in 2009. The creation of these new institutions raised high hopes that the culture of impunity that has prevailed in Bahrain for many years would be brought to an end.