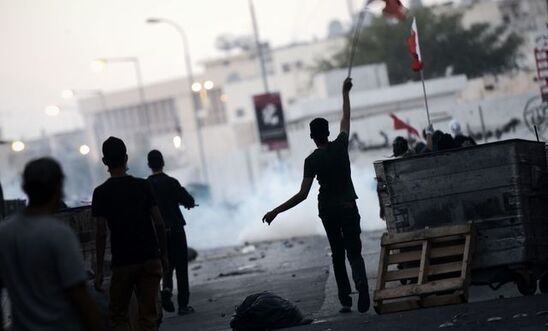 Protests in Bilad al-Qadeem, a suburb of Manama, after the arrest of the head of the banned Shiite opposition movement Al-Wefaq, Sheikh Ali Salman, in December 2014 © AFP/Getty Images

Crackdown on dissidents has intensified in recent years

Ten years after Bahrain’s popular uprising, systemic injustice in the country has intensified and the only structural changes since the mass protests at the Pearl Roundabout in Manama have “been for the worse”, said Amnesty International today.

In the decade since the 2011 protests over government authoritarianism, sectarianism in employment and benefits, and refusal to provide accountability for torture and arbitrary detention, political repression has intensified in the country.

Dissidents, human rights defenders, clerics and members of independent civil society have been silenced, and any space for the peaceful exercise of the right to freedom of expression or peaceful activism extinguished.

Inspired in part by similar uprisings in Tunisia and Egypt, from 14 February 2011 tens of thousands of Bahraini citizens gathered at Pearl Roundabout in Manama’s financial district, where protesters set up camp for several weeks. The Bahraini government responded with a brutal crackdown and called in a Saudi-led intervention force from neighbouring countries.

Bahrain’s approach to critics since 2011 is exemplified by its treatment of Sheikh Ali Salman, the head of the now-banned al-Wefaq, formerly Bahrain’s largest legal opposition party. He was first imprisoned for his critical political speech in 2014, had his sentence doubled in 2016, then was given a life sentence in 2018 for joining mediation attempts during the uprising. Bahraini authorities described his participation in Qatari-mediated talks, in which Bahrain’s government itself participated, as “spying” for Qatar.

The second major opposition party - the non-sectarian Wa’ad - has also been banned, and its former head, Ebrahim Sharif, spent five years in prison for his role in supporting the 2011 protests.

Since 2016 especially, dissenters in Bahrain - including political activists and leaders, human rights defenders, lawyers, journalists, Shi’a clerics, and peaceful protesters - have faced growing  repression, including threats, summons, travel bans, arrests, interrogations and prison sentences. The Pearl Roundabout, which came to be a unifying symbol of the hopes of national renewal in February 2011, was bulldozed and paved over the following month.

“Since 2011, the only structural changes Bahrain has seen have been for the worse, as opposition parties have been outlawed, the only independent news outlet has been shut down, and new laws have further closed the space for political participation.

“The protest leaders of 2011 continue to languish in grim prison conditions, and human rights - including the right to freedom of expression - are routinely trampled on.

“The Bahraini state has crushed the hopes and expectations raised by the mass protests of ten years ago, reacting with a brutal crackdown over the subsequent decade that has been facilitated by the shameful silence of Bahrain’s Western allies, especially the UK and the US.

“We urge the authorities to reverse the terrible course of the past ten years by adopting the full and effective implementation of all the recommendations in the BICI report, and for the immediate and unconditional release of those imprisoned solely for peacefully exercising their human rights.”

Ten years on, the Bahraini government continues to ignore key recommendations of the Bahrain Independent Commission of Inquiry (BICI), an independent panel commissioned by the Bahraini king in response to international concern over Bahrain’s suppression of the 2011 protests. The BICI report found that between February and April 2011 at least 19 people were killed by the authorities - eight of them due to excessive force being used by the security forces, and five others due to torture. Thousands were arrested, including protest leaders and opposition figures who remain in prison to this day after grossly unfair trials.

The report also made numerous recommendations - including prompt investigation of all allegations of maltreatment by independent forensic experts; removal of the national security intelligence agency from the process of domestic law enforcement; relaxation of censorship; and allowing the political opposition access to state-controlled media. Ten years later, none of these recommendations have been implemented, in violation of Bahrain’s obligations under international human rights law.