Arms companies are 'washing their hands of their responsibilities' - new report 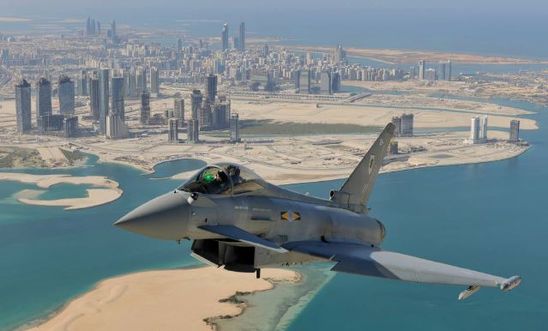 The UK has sold dozens of Eurofighter Typhoons to the Saudi Arabia/UAE-led military coalition operating in Yemen © Eurofighter - K. Tokunaga

As the global arms industry prepares to set up shop at the DSEI arms fair in London this week, a new report today by Amnesty International reveals that the world’s biggest arms companies - including Airbus, BAE Systems and Raytheon - are failing to undertake adequate human rights due diligence which could prevent their products from being used in potential human rights violations and war crimes.

Governments’ human rights obligations to regulate the international arms trade are laid out under the UN Arms Trade Treaty and regional and domestic legislation, but Amnesty’s report says that the role of companies in the supply of military goods and services is being overlooked, despite the often inherently dangerous nature of their business and products.

For its new 68-page report - Outsourcing Responsibility - Amnesty contacted 22 arms companies from 11 countries asking them to explain how they meet their responsibilities to respect human rights under internationally-recognised standards.

Fourteen of the companies failed to respond at all (see below), while of the eight that did - Airbus (Netherlands), BAE Systems (UK), Leonardo (Italy), Lockheed Martin (USA), Raytheon (USA), Rolls-Royce (UK), Saab and Thales (France) - none was able to adequately explain how they meet their human rights responsibilities and demonstrate proper due diligence. A full list of responses is available here.

Many of the companies investigated for the report have made millions from supplying arms and services for the Saudi Arabia/UAE-led coalition’s campaign in Yemen, where the coalition is accused of committing war crimes and serious human rights violations.

BAE Systems, Boeing, Lockheed Martin and Raytheon, among others, have been integral to the coalition’s Yemeni war effort, arming a fleet of combat aircraft that has repeatedly struck civilian objects - including homes, schools, hospitals and marketplaces. None of these companies explained what human rights due diligence they had undertaken to assess and address the risks of supplying arms and services to the coalition.

In one instance Amnesty traced a bomb remnant from the site of an airstrike in Sana’a - which killed six children and their parents in 2017 - to Raytheon’s manufacturing plant in Arizona. When Amnesty asked Raytheon what steps it had taken to investigate and respond to this incident, the company said: “Due to legal constraints, customer relations issues … Raytheon does not provide information on our products, customers or operational issues.” Raytheon added that prior to export, military and security equipment is “subject to a multifaceted review by the US Department of State, Department of Defence and Congress”.

Meanwhile, the UK arms company BAE Systems described Amnesty’s conclusions as “false and misleading”, adding that BAE applies “measured and appropriate policy and process of its own in respect of compliance with laws and regulation” through its Product Trading Policy. However, when questioned on human rights due diligence in relation to BAE’s trade with Saudi Arabia, the company said: “Our activities in Saudi Arabia are subject to UK government approval and oversight.”

For its part, the Italian company Leonardo said that Amnesty’s conclusions were “not completely fair” and that the company did carry out human rights due diligence which went beyond compliance with national licensing laws and regulations. However, the company did not explain how these policies work in practice in concrete situations - for example, in exports to the Saudi Arabia/UAE coalition for use in the Yemen conflict.

Amnesty is calling on defence companies to vet clients’ past performance against human rights benchmarks; build high expectations of compliance with international human rights law into contracts; continuously monitor and periodically audit client performance; and use leverage to influence the behaviour of clients.

“The role of arms companies in deadly conflicts marred by serious human rights violations has been the elephant in the room for too long.

“While states like the UK are - rightly - being pursued in the courts for their reckless arms deals, the corporations who profit from supplying arms to countries involved in these conflicts have largely escaped scrutiny.

“Not one of the companies we contacted was able to demonstrate adequate human rights due diligence. Not only does this show an alarming indifference to the human cost of their business, it could potentially expose these companies and their bosses to prosecution for complicity in war crimes.

“Defence giants are washing their hands of their responsibilities by arguing that, once their goods are shipped, they no longer have any control over how they are used. This argument doesn’t stand up, legally or ethically - it’s high time companies started taking responsibility for their decisions.

“If it is impossible to avert the risks that arms will be used for human rights abuses, companies should avoid or cease supplying weapons.

“Most companies who responded to Amnesty made the argument that responsibility for human rights assessments lies with their home states through the arms licensing process.

“But government regulation does not exempt companies - no matter what sector they operate in - from carrying out their own human rights due diligence. Hiding behind governments is not good enough - especially when licence decisions have been shown to be flawed, and governments issuing licences are themselves being challenged over their role in war crimes and other violations.”

The 14 companies that did not respond

Amongst other issues, the Russian arms exporter Rosoboronexport has supplied military equipment to the Syrian armed forces, who stand accused of numerous war crimes and crimes against humanity; rifles made by Zastava have been traced by Amnesty to a horrific mass execution in Cameroon; while armoured vehicles made by Arquus (formerly Renault Trucks Défense) supplied to Egypt have been used to brutally crush dissent.

Due diligence under UN principles

Under the UN Guiding Principles on Business and Human Rights, all companies have a responsibility to respect human rights and undertake human rights due diligence to identify, prevent, mitigate and account for how they address both their potential and actual human rights impacts. In relation to the defence sector, this means companies must assess and address human rights risks and abuses arising in all aspects of their business, including how clients such as national armies and police forces use their weaponry and related services.

The primary purpose of due diligence is to avoid causing or contributing to human rights abuses. Therefore, if a company cannot prevent or adequately mitigate adverse human rights impacts, it should avoid or cease supplying the relevant arms and related services. These responsibilities exist over and above compliance with national laws and regulations - such as state licensing systems - aimed at protecting human rights.

Failure to carry out adequate human rights due diligence increases both reputational and legal risks for an industry that supplies high-risk products to dangerous environments. Legal concepts of “corporate complicity” in and the “aiding and abetting” of international crimes continue to evolve and could in the future apply to arms companies that continue supplying weapons in the knowledge that they may be used to commit or facilitate serious violations of international human rights or humanitarian law.