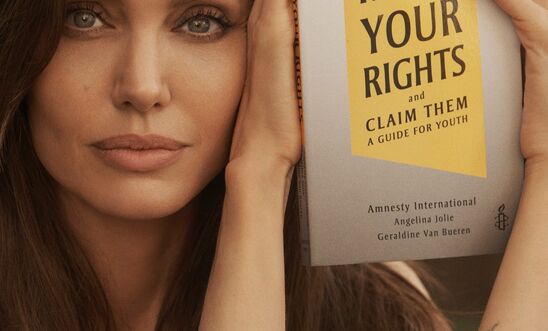 Angelina Jolie with Know Your Rights and Claim Them! © Lachlan Bailey/Art Partner

Angelina Jolie and Amnesty International have joined forces to create a powerful resource for children and young people to learn about their rights, with the publication today (2 September) of a hard-hitting new book which empowers teenagers to speak out against injustice.

Know Your Rights and Claim Them is written for children and is informed by them. It explains what child rights are, how they came in to being, how governments are failing to uphold them and it equips young people with the knowledge they need to protect themselves and others.

Know You Rights includes how-to guides such as what to do if a young person is pepper sprayed at a protest, how to talk to the police if they are challenged or arrested, tips on being a trans or non-binary ally, and steps to take if a young person - or someone known to them - is being sexually groomed or abused.

Written in collaboration with Professor Geraldine Van Bueren QC, one of the original drafters of the UN Convention on the Rights of the Child, the book features the stories of incredible young activists who are at the forefront of human rights change around the world - from campaigning on climate change, to demanding access to education or speaking out against racial discrimination and gun violence.

British children featured in the book include the ‘Glasgow Girls’ - a group of schoolchildren who campaigned to change the law around dawn immigration raids and prevent their schoolmate from being removed, and 13-year-old transgender girl Emily Waldron who campaigns for equality and visits schools to give talks about trans rights.

New YouGov polling to accompany the book found that an overwhelming 83% of British children aged 8-15 said they know little or nothing about their own rights. Sixty-four per cent of children said they knew only a little about their rights, with a further 19% saying they didn’t know anything at all. Just 17% of the young people approached in the poll felt they knew a lot about their rights.

When British parents of children aged 18 and under were polled about children’s rights, only 16% knew that children actually have more rights than adults do. Four-fifths (80%) of children thought it should be compulsory to be taught about rights in school, while two-thirds (66%) of the parents agreed with this proposition. However, nearly one in five parents (19%) thought it should not be.

“If governments kept their word, and if all adults respected children’s rights, there would be no need for this book.

“Governments signed up to protect children’s rights in 1989, yet many of them are still failing to listen to the voices of children.

“In some countries, girls as young as nine are forced into marriage. Globally, more than 61 million children don’t attend primary schools and in 2019 one in six children were living in extreme poverty - a number that rose significantly during the pandemic.

“Know Your Rights and Claim Them is the book some adults don’t want children to read, as it will arm them with the knowledge to defend their rights and those of others.

“Children have rights just as adults do and they should have the power and agency to claim them. It’s time to remind the world of its commitment to children’s rights.”

Amnesty is calling on UK schools to commit to allowing children to take part in protests without them fearing that they will be punished, even if they take place during school hours. When polled, more than one in four schoolchildren between the ages of 8 and 15 (27%) thought that they should be able to protest even if it meant missing school time. Only half of this number of parents (14%) felt the same way.

Vinuki Bakmeedeniya, from Amnesty UK’s Children’s Network, who acted as a consultant for the book, said:

“Children should not only know their rights - they should know how to claim them, and this is a very important book at a very precarious time for many young people.

“It’s not enough that children have rights, they have the right to know about them. It’s terrible but not surprising that more than 80% of children know little or nothing about their own protections.

“This book should be on the shelves of every school library across the UK and around the world. We want to see young people feeling confident and empowered to shape their world and forge a fairer future.

“Schools should encourage young people to protest and stand up to injustice and normalise speaking out without fear of punishment. Learning about your own personal power to change what’s wrong, is the most precious lesson of all.”

Amnesty has launched a new action calling for a guarantee that children will be protected from punishment for taking action in defence of human rights whilst in school at: https://www.amnesty.org.uk/protect-child-protest-rights

Know Your Rights and Claim Them is published by Andersen Press and is available in bookshops across the UK from today (Thursday 2 September) priced £7.99 with other countries to follow. The authors’ goal is for the book to be published in all languages and in all countries, empowering many millions of young people to know and claim their rights.