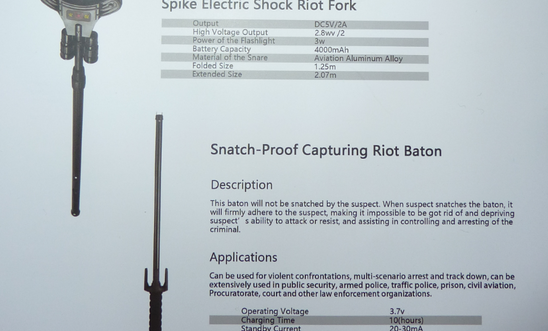 Milipol, one of Europe’s biggest military and police trade fairs, is taking place this week in the French capital.

The import and export of torture equipment has been banned in the European Union since 2006.

Some items identified by Amnesty were listed in catalogues present at the exhibition, while others were found on display - raising serious questions as to how they were imported into the EU.

Amnesty raised its findings with Milipol’s exhibit control office. Representatives of the office said they attempt to monitor the exhibition for such prohibited items.

The full list of equipment seen by Amnesty researchers at Milipol are as follows:

There is an explicit ban on advertising prohibited equipment at trade fairs and exhibitions in the EU, and a further ban on purchasing advertising space/time - including online - for such goods.

Last year, the EU also banned the promotion and display of such equipment at trade fairs.

“Brutal implements of torture like spiked batons and weighted leg-irons were supposed to have been banned for good in the EU. So why are they for sale in Paris today?

“By failing to enforce the law, France is providing a marketplace for torturers. Milipol is the first real test of the new EU rules on torture tools, so it is alarming to see those rules already being flouted, less than a year after they came into force.”

In September, the EU-led “Global Alliance for Torture Free Trade” was launched by the EU Trade Commissioner, Cecilia Malström, at the UN General Assembly in New York. One of the key purposes of the Global Alliance, which France has joined, is the promotion of legislation pioneered in the EU.

“The EU has led the way in banning torture equipment, yet today we have seen tools of torture proudly on display in the heart of Paris.

“If EU states cannot keep their own houses in order by properly implementing the regulation in the EU, how are they going to persuade other countries to stamp out this cruel trade?

“We are urging the French authorities to urgently investigate the import of these illicit items.

“They must put measures in place to robustly implement the EU regulation so that no person or company can continue to make a profit from this trade in implements designed to cause human suffering.”

What are ‘tools of torture’?

Tools of torture refers to a wide range of security and law-enforcement equipment which could be used to torture, ill-treat or execute people.

For background, see Amnesty and Omega’s recent briefing: Tackling The Trade In Tools Of Torture And Execution Technologies .

EU governments introduced regulations in 2006 which concerned the “trade in goods which could be used for capital punishment, torture or other cruel, inhuman or degrading treatment or punishment”.