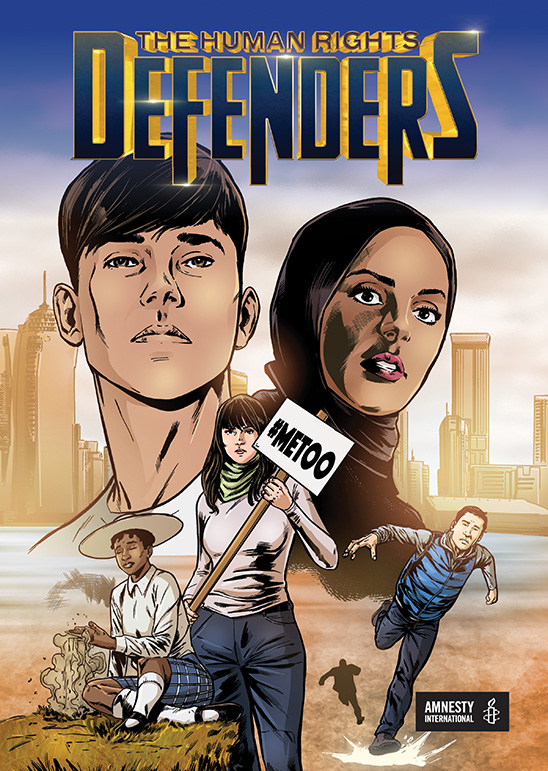 All over the world, hard won rights are being weakened and denied every day. Like being able to live, work and love freely without facing abuse, imprisonment or even death for who they are and the choices they make.

But ordinary people with extraordinary passion are fighting back. They are mothers and fathers, sisters and brothers, teachers and students, nurses and journalists. They call out the discrimination and unfair treatment they see around them every day. They stand to protect themselves, their communities, you. They are Human Rights Defenders.

In a bid to shed light on this issue and lobby the UK government to adopt a clear and coherent strategy to support and protect human right defenders around the world, Amnesty has launched a campaign to encourage the UK public to #SendBackUp.

Inspired by Marvel and DC Superheroes, Amnesty UK have created a unique and inspiring take on a superhero collective – ‘The Human Rights Defenders’. Passion is their power, and human rights for all is their mission. Each of the five Human Rights Defenders are inspired by real life activists and through this campaign, Amnesty International is sharing their inspiring stories:

Evie spoke out about sexual harassment at work during a #MeToo rally. The speech was recorded by a news channel and went viral – now she’s spreading her message far and wide on behalf of women everywhere. But with the press and social media flooding with abusive comments about her, will it all become too much to bear?

Felipe’s partner Lucas was murdered in a drive-by shooting for being gay. The police have done nothing to bring his killers to justice. Now Felipe is fighting for LGBTI rights in Brazil – but with a new far-right government in power, will love win over hate?

Laila became a feminist icon when she helped win Saudi Arabian women the right to drive. But the Saudi prince didn’t take too kindly to her new found fame – and how he wants her kept quiet. Will this be the last we ever hear from her?

As a talented hacker and IT expert, Li Wei runs one of China’s most subversive news sites, exposing the truth to millions. Now he’s a wanted man – and in the world’s most powerful surveillance state, where is there to hide?

Droughts in Ayah’s homeland have left thousands struggling to cope. Now she’s taken to the streets of Kenya with her schoolmates to fight back against climate change. She wants a brighter future for us all – but how can one girl take down the big oil companies?

“I believe It’s our duty to defend those who defend human rights. Who will protect our rights, if they don’t? And who will protect them if we don’t call on our governments to make the protection of human rights defenders a priority. That’s why I felt this was such an important campaign to be a part of. If we don’t who will?” Gillian Anderson

Actors Patrick Stewart and Paul Bettany, known for their involvement in the Marvel films, have also shown their support for the campaign by providing review quotes for the film posters:

“Ordinary people doing extraordinary things. These are the real-life heroes.”

‘THE HUMAN RIGHTS DEFENDERS’ NEED YOU TO #SENDBACKUP

As a world leader, the UK needs to do more to protect Human Rights Defenders. Only by showing consistent support for those on the front line of protecting human rights will the country make a real and sustainable impact in all areas of its human rights work.

The Human Rights Defenders need you to #SendBackUp, so they can continue to do their important work without the threat of harassment, intimidation or violence.

Let’s make sure humanity wins once and for all. Will you ask your MP to take the lead on protecting human rights defenders? Amnesty International UK is calling for the UK public to follow this link to send a call for back-up to their local MPs - AMNESTY.ORG.UK/DEFENDERS