Americas: countries crack down on asylum and right to protest in 2019 - new report 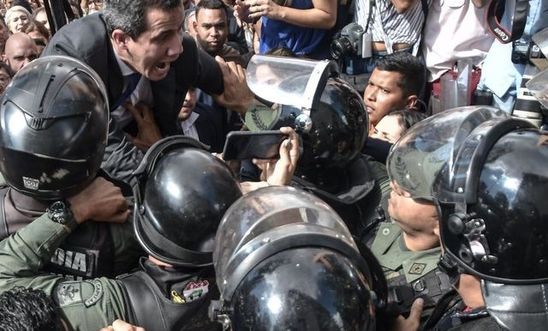 Region once again world’s most dangerous for human rights defenders

At least 210 people killed in protests across Americas

Governments across the Americas launched a “renewed assault on human rights” in 2019, using increasingly violent tactics to stop people from protesting or seeking safety in another country, Amnesty International said today launching its annual report for the region.

The 68-page report details how millions took to the streets in 2019 to protest against rampant violence, inequality and corruption, or were forced to flee their countries in search of safety. It shows how the response by governments across the region was to clamp down on their rights.

In total, at least 210 people died violently in the context of protests across the Americas: 83 in Haiti, 47 in Venezuela, 35 in Bolivia, 31 in Chile, eight in Ecuador and six in Honduras.

The region was also once again the world’s most dangerous for human rights defenders, with those dedicated to protecting rights to land, territory and the environment particularly vulnerable to targeted killings, criminalisation, forced displacement and severe harassment.

“2019 brought a renewed assault on human rights across much of the Americas, with intolerant and increasingly authoritarian leaders turning to ever-more violent tactics to stop people from protesting or seeking safety in another country.

“But we also saw young people stand up and demand change all over the region, triggering broader demonstrations on a massive scale. Their bravery in the face of vicious state repression gives us hope and shows that future generations will not be bullied.

“With yet more social unrest, political instability and environmental destruction looming over the region in 2020, the fight for human rights is as urgent as ever.”

In 2019, protest movements, often led by young people, rose up to demand accountability and respect for human rights in countries like Venezuela, Honduras, Puerto Rico, Ecuador, Bolivia, Haiti, Chile and Colombia, but the authorities typically responded with repressive and often increasingly militarised tactics.

The repression in Venezuela was particularly severe, with security forces carrying out extrajudicial executions and arbitrary detentions that could amount to crimes against humanity. In Chile, the army and police also set out to deliberately injure protesters to discourage dissent, killing at least four people and seriously wounding thousands more.

Mexico was one of the world’s deadliest countries for journalists, with at least 10 killings in 2019. It also suffered a record number of homicides but persisted with the failed security strategies of the past by creating a militarised National Guard and passing an alarming law on the use of force.

Gun violence remains one of the biggest human rights concerns in the United States. A new rule announced by the Trump administration in January 2020 has made it easier to export assault rifles, 3-D printed guns, ammunition and other weapons. Similarly, in Brazil president Jair Bolsonaro signed a series of decrees and executive orders that loosen regulation on the possession and carrying of firearms.

The number of men, women and children to have fled Venezuela’s human rights crisis in recent years rose to almost 4.8 million – an unprecedented figure in the Americas – but Peru, Ecuador and Chile responded by imposing restrictive new entry requirements and unlawfully turning away Venezuelans in need of international protection.

The US has forced tens of thousands to wait in dangerous conditions in Mexico under the “Remain in Mexico” procedure.

The environment and gender-based violence

The Guatemalan government undermined victims’ access to justice for grave human rights violations by shutting down the International Commission against Impunity in Guatemala last year. In neighbouring Honduras, the government similarly announced the end of the Mission to Support the Fight against Corruption and Impunity in Honduras in January 2020.

Environmental concerns continued to rise across the Americas, with the Trump administration formally announcing its intention to withdraw from the Paris agreement, while severe environmental crises in the Amazon affected Indigenous Peoples in Brazil, Bolivia, Peru and Ecuador. Brazil was hit particularly badly, with president Bolsonaro’s anti-environmental policies fuelling devastating wildfires in the Amazon and failing to protect Indigenous Peoples from illegal logging and cattle farming.

Despite some progress and the growth of diverse women’s rights movements in the Americas, gender-based violence remained widespread. In the Dominican Republic, police routinely raped, beat and humiliated women engaged in sex work. The authorities in El Salvador continued to criminalise women and girls – especially those from disadvantaged backgrounds – who suffer obstetric emergencies under the nation’s draconian total ban on abortion, while a girl under 15 gave birth every three hours in Argentina, the majority after undergoing forced pregnancies that resulted from sexual violence.

Human rights victories and reasons for optimism in 2020

The last year has also brought some positive news. By the end of 2019, 22 countries had signed the Escazú Agreement, a groundbreaking regional treaty on environmental rights.

In the United States, a court in Arizona acquitted the humanitarian volunteer Scott Warren of “harbouring” two migrants in November after he provided them with food, water and a place to sleep, and a federal judge reversed the conviction of four other humanitarian volunteers on similar charges in February.

The acquittal of Evelyn Hernández, who was charged with aggravated homicide after suffering an obstetric emergency in El Salvador, was another victory for human rights, although prosecutors have since appealed against the verdict. Young women and girls also emerged at the forefront of the largely youth-led movements standing up for human rights that brought optimism for 2020, as evidenced by powerful feminist demonstrations in places like Argentina, Mexico and Chile.