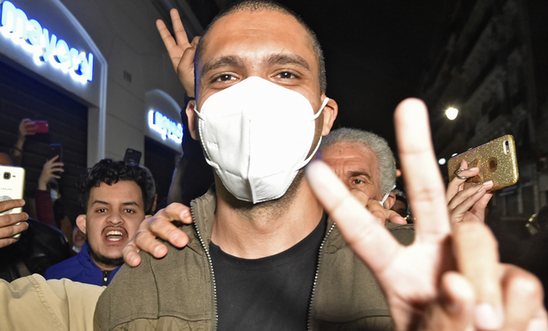 “These arrests mark a chilling escalation in the Algerian authorities’ clampdown on the rights to freedom of expression and association ahead of the elections.

“It is highly likely that the three men have been targeted as retribution for their ties to the Hirak protest movement, which has called for radical political change in Algeria through peaceful means.

“Their detention follows an alarming pattern in recent months of arbitrary arrests and prosecutions of journalists and activists calling for social justice and political reforms.

“Unless the authorities have clear grounds to justify these arrests, the three men must be immediately released.”

The three men were arrested separately last night (10 June) and have been detained in Antar security centre for interrogation.

It is not the first time the three men have been targeted by the Algerian authorities.

Last August, Khaled Drareni was sentenced to three years in prison after a grossly unfair trial for his coverage of the Hirak protest movement. The sentenced was later reduced to two years on appeal and in February he was released and his case sent for retrial by the Supreme Court.

In March last year, Karim Tabbou was sentenced to a year in jail on trumped-up charges in relation to comments made in videos published on his party’s Facebook page in which he criticised the role of the army in politics.

Ihsane El Kadi, director of Maghreb Emergent and RadioMPost, has faced legal proceedings for “defamation and insult” against Algeria’s president. The authorities have also blocked his media outlets.

There are 223 people currently detained in Algeria in connection with the Hirak protest movement, according to local groups and activists monitoring the human rights situation.