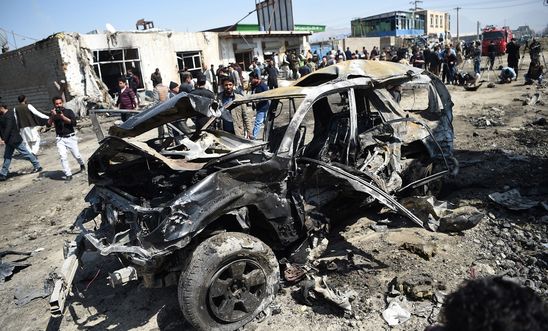 The aftermath of a Taliban car bomb attack in Kabul in March 2018. © AFP/Getty Images

The US and the Afghan Taliban’s negotiations over a ‘reduction in violence’ must include a commitment by both sides to abide by the laws of war and end all attacks on civilians, Amnesty International said today.

Over the past week, representatives of the USA and the Afghan Taliban have been engaged in closed-door negotiations in Doha, Qatar, apparently aimed at agreeing to levels of “violence reduction” in the conflict in Afghanistan.

“In a conflict marked by attacks on civilians, the term ‘violence reduction’ is an absurdity. There can be no acceptable level of violence.

“Claims of peace cannot be taken seriously as long as combatants continue to target civilians.

“The United States and the Afghan Taliban must commit to abide by the laws of war and end all attacks on Afghan civilians.

“They must commit to protecting civilians, and all attacks on civilians must be investigated and prosecuted. Peace talks must not, under any circumstances, become a licence for impunity.”

Civilian casualties remain at near-record levels in Afghanistan. In the first nine months of 2019, at least 2,563 civilians were killed and 5,676 wounded, according to figures published by the United Nations Assistance Mission in Afghanistan (UNAMA).

Since UNAMA began compiling records in 2009, there have been an estimated 34,000 Afghans killed and 66,000 injured. Afghanistan remains the deadliest conflict in the world for children.

Civilians continue to be killed in large numbers in operations by both pro-government forces and international forces, and the Taliban and other armed groups.

The Taliban and other armed groups have deliberately attacked civilians in war crimes, including assaults on schools and mosques. The armed group calling itself the Islamic State in Khorasan has attacked religious minorities, including the bombing of a Shi’a Hazara wedding last August, killing nearly 100 people.

Pro-government and international forces have been responsible for civilian casualties in aerial attacks and night-time ‘search operations’.