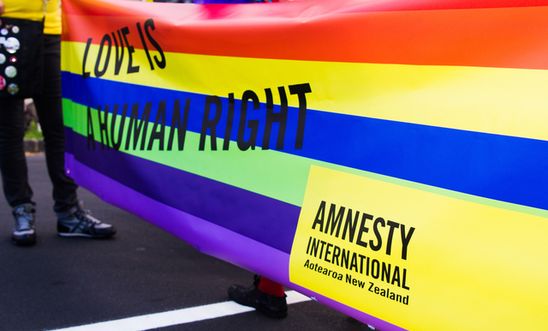 Governments around the world are failing to live up to their obligations to protect the rights of lesbian, gay, bisexual, transgender and intersex people, Amnesty International said on the eve of the International Day against Homophobia and Transphobia.

“2014 has been a dismal year for LGBTI rights so far. It’s hard to believe that in this day and age two men have been forced to stand trial for the ‘crime’ of homosexuality. In Russia, Uganda and Brunei, draconian and degrading anti-laws have been passed allowing governments to legitimise and institutionalise homophobia and transphobia.

“In many of these countries, those in charge of protecting their civilians have turned on them. Governments have endorsed homophobia through lawful witch-hunts and police now have free rein to arrest and intimidate those suspected of homosexuality.”

This year Amnesty is focusing attention on a number of countries where change is urgently needed.

Cameroon: Violence, arbitrary arrest and detention because of real or perceived sexual orientation are commonplace. Cameroon’s penal code criminalises same-sex sexual acts and the offence is punishable by up to five years’ imprisonment.

Haiti: Attitudes to LGBTI people have become increasingly hostile since the 12 January 2010 earthquake, when a number of religious groups providing aid to Haiti claimed homosexuality had led to the natural disaster. In November 2013 men armed with machetes and handguns beat up two members of an LGBTI rights group at their office in Port-au-Prince.

Russia: A 2013 act has outlawed public LGBTI events. Several peaceful assemblies have been disrupted by the authorities on the basis of this homophobic law. Police routinely fail to protect LGBTI individuals from violent attacks.

Serbia: A Pride event planned for 31 May is at risk of a last minute ban. Since 2011 public authorities have banned Pride marches on the basis of threats from homophobic groups. A march in 2010 was overshadowed by 6,500 angry counter-demonstrators.

Uganda: On 23 February the President signed into law an Anti-Homosexuality bill which stipulates a life sentence for same-sex relations, and allows for the extradition of Ugandans having same-sex relations abroad. Violent attacks, arbitrary arrests and torture and other ill-treatment of LGBTI people continues with alarming frequency.

Ukraine: After being banned from the city centre, the first Kyiv Pride was held last year in an isolated location. Counter-demonstrators still tried to disrupt it, throwing firecrackers and tearing down banners. Organisers of the 2014 Pride on 5-7 July have received threats of violence, while the government refuses to legislate against discriminating towards LGBTI people.

Since the 1970s, Pride marches have been crucial for LGBTI people to mobilize against homophobia and transphobia, to stand against discrimination, to build bridges with mainstream society and to send a clear message to the authorities that they have a responsibility to ensure the rights of all people.