Celebrating 70 years of the Universal Declaration of Human Rights 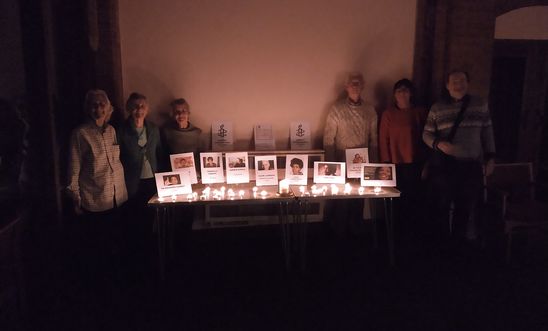 The group celebrating the 70th birthday of the Universal Declaration of Human Rights. © AI-Soton

10 December is Human Rights Day, and in 2018 it is also the 70th anniversary of the adoption by the United Nations of the Universal Declaration of Human Rights.

The Declaration sets out the 30 rights and freedoms which should be available to everyone in the world, wherever they live and whatever they believe.

The Southampton Group of Amnesty International marked the anniversary by lighting 30 candles. These were placed among photographs of individuals in various countries who have shown great courage in standing up for freedom and justice, despite facing harassment, imprisonment or even death for their activities. We are campaigning for justice for them and will not allow them to be forgotten.

Among those featured are two prisoners of conscience in Eritrea. Aster Fissehatsion is a politician who was arrested in 2001 after joining a call for more democracy in the country. She has been in incommunicado detention ever since, and her fate is unknown. The other Eritrean is Dawit Isaak, a journalist who was arrested after opposing the closure of independent newspapers by the government in 2001. He has not been charged or tried, and we do not know his current whereabouts.

Also featured in our Human Rights Day action was Dr Eduardo Cardet, leader of a Christian movement in Cuba who was arrested soon after the death of Fidel Castro for allegedly criticising the former leader.

Marielle Franco was a courageous city councillor in Rio de Janeiro who defended the rights of women, black and other marginalised people in the city. She was shot dead, one of many extrajudicial killings in Brazil.

We also remembered Ni Yulan, a housing activist in China. She was so badly beaten by police and prison guards that she can now only get about with the help of crutches or a wheelchair. Nevertheless she continues to campaign for the rights of others in her community.