Nationality & Borders Bill: the truth behind the claims 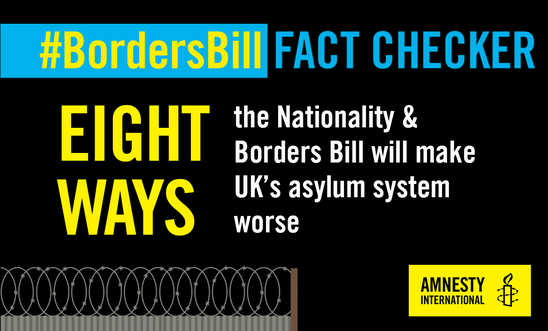 The Government has introduced a raft of measures in a new piece of legislation that, if passed, will create significant obstacles and harms to people seeking asylum in the UK’s asylum system.

The Nationality and Borders Bill was introduced into the House of Commons in July 2021 and completes its Committee stage in that House on 4 November.

Despite Ministers asserting the measures included are aimed at cutting costs, breaking people smuggling gangs and protecting people seeking asylum, the Bill fails to deliver in all these and other areas.

Ministers claim the Borders Bill will break the business model of people smugglers through provisions that increase criminal sentences, penalties and border controls. These will additionally be applied to anyone helping someone to seek asylum in the UK, regardless of whether their help is for financial gain or not.

The Bill will do the exact opposite of what Ministers’ claim, allowing smugglers to thrive. It will only increase the reliance of people, already vulnerable to exploitation, upon the gangs that remain the sole source of any prospect that people may have to ultimately escape their situations of insecurity, exploitation and deprivation by reaching a place of safety.

Despite Ministers’ claims that it will save lives, the Bill will, again, have the opposite effect. There is no question most, if not all, journeys to the UK by people seeking asylum are unsafe, but criminalising people for making these journeys doesn’t take away people’s need to seek asylum in the UK. In the absence of a safe and permitted route, a dangerous journey will continue to be all that is left.

By failing to provide any safe or safer alternatives for people still compelled to make journeys, the Government is not merely perpetuating the very conditions that put people at risk. It is also making this much worse and making the likelihood that people die or suffer other serious harms much greater.

Nothing in the Bill creates or supports the creation of safe routes for people seeking asylum. Under current immigration rules in the UK, there are no routes permitting someone to come to the UK to seek asylum and yet all applications for asylum must be made within the UK.

The Bill, however, includes various measures to penalise a refugee entitled to asylum in the UK for having reached here by the only means that were available being a journey for which permission was not given in advance. Those penalties include delaying or denying the reunion of relatives through family visas – so removing a safe route for the refugee’s partner or child to reach the UK.

Claim 4: Increased protection for refugees and survivors of modern slavery

The Bill also makes provision for offshore asylum processing. This would put a refugee at grave risk of neither receiving the protection to which they are entitled nor being treated in accordance with human rights and refugee law while their asylum claim is considered.

Ministers have emphasised the Bill is aimed at alleviating an asylum system under pressure even though the UK’s asylum system continues to receive relatively few claims. In truth, the UK is far behind many European neighbours, such as France and Germany, in terms of numbers of asylum applications received and people provided protection.

Moreover, several provisions will add significant new work for the Home Office. For example, having to repeatedly review the asylum claims of people already found to be refugees; and having to accommodate and manage people whose entry to the asylum system is delayed by the Home Office, even though it will ultimately have to deal with their claims.

Claim 6: Savings to the public purse

While Ministers claim the Bill will save money, it will instead increase costs to the taxpayer. As is recognised expressly in the Bill, some of its provisions will require additional spending on legal aid, financial support for asylum applicants and their accommodation.

Other provisions require cooperation from other countries for the UK to transfer its responsibilities and people seeking asylum from the UK. There is no incentive for that cooperation unless the UK is willing to pay these countries potentially large sums of money. Australia has incurred huge costs to operate its cruel regime of transferring people and its responsibilities to other countries.

Claim 7: Deterring entry to the UK without permission

People who are trafficked into the UK are controlled by traffickers, and therefore not liable to be deterred from entering the UK. People seeking asylum need to do so, and if their needs were not so great they would not make these dangerous journeys.

However, while the Bill is unlikely to deter entry to the UK without permission, it is likely to deter some people from making their asylum claims in the UK. This will increase the number of undocumented people in the UK; and increase the vulnerability of people to exploitation and abuse even after they have arrived.

The Bill ought to respect and uphold the 1951 Geneva Refugee Convention but it does the very opposite – including by measures to introduce a unilateral interpretation of an internationally agreed legal commitment on protecting refugees.

The UK already lags far behind its European neighbours in terms of providing asylum. It’s unlawful for the UK to fail to respect the Convention. It is all the more improper to do this at the same time as imploring other countries to continue to take even more of the responsibility for providing asylum that the UK continues to shirk.

The Refugee Convention is not the only international obligation of the UK that is undermined by this Bill. The Bill also undermines the UK’s obligations under the Convention on the Rights of the Child and the Convention on Reduction of Statelessness. This is all a dreadful signal to send to others, encouraging them also to fail to uphold these and other human rights commitments.