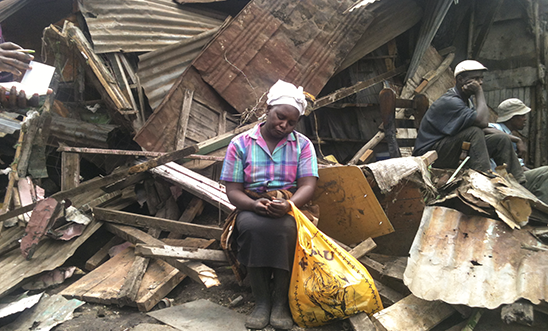 Residents from the informal settlement City Carton in Nairobi, also known as City Cotton, have won a major court battle against forced eviction from their homes in 2013.

In the early morning of 10 May 2013, residents of City Carton were woken by groups of young men who burst into their homes, with no prior warning, to forcibly evict them.

Nearly 400 homes were destroyed with crowbars and sledgehammers, leaving the people of City Carton homeless and unable to salvage their possessions.

The police fired live ammunition – residents reported at least five gunshots and showed us two cartridge cases found in the rubble – and at least five teargas canisters during the operation.

The District Commissioner denied any knowledge of the eviction.

Justice for the residents

We worked with residents of City Carton fighting against this eviction, along with other partner organisations.

In October 2014, the residents won a major court battle against both the company who carried out the evictions, Moi Educational Centre, and the Kenyan Government. Lady Justice Mumbi Ngugi ruled that both should pay compensation to the residents.

‘The eviction and demolition of houses was the most degradation of human dignity….
Moi Educational Centre was the author of the unlawful acts that led to violation of the petitioner’s rights and the State, through the national police, chose to aid it against the interests of the poor, marginalised villagers.’
Lady Justice Mumbi Ngugi

We're hopeful that the ruling will set a precedent for other forced eviction cases in Kenya.

‘This is great victory for City Cotton. We will now push for implementation of the judgement. We are so motivated by this ruling; It has renewed our energies to do more.’
Gakii Kiogora of Amnesty International Kenya

Housing is a human right

Forced evictions take place all over the world. Communities are destroyed in the name of development or regeneration.

Building roads, railways or even tourist resorts are common reasons given for evicting people from their homes.

But forced evictions are illegal under international and regional human rights law. People living in informal settlements have the same rights to adequate housing, water, sanitation, education and health care as everyone does.

Housing is a human right. No one should be forcibly evicted, no matter where they live.