It takes a village to end FGM and child marriage 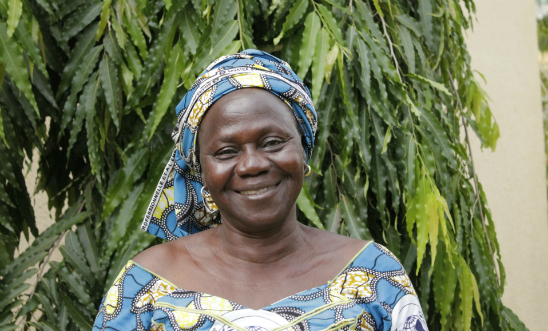 Veteran women’s rights activist Bibata Ouedrago describes the excruciating pain inflicted by the customary FGM practice – and how to break down barriers, get a village talking and embrace a huge change for the better

Female genital mutilation (FGM) is a harmful practice. First the pain these women suffer is an atrocious, unforgettable pain. I can say this personally. I was mutilated and still today I remember so much that I can see the images again. It is a pain that remains with a woman for life. This is the first thing.

Second, there are many problems caused by FGM. A mutilated woman is no longer as sensitive as a woman who has not been mutilated. When the woman is cut, it is a ‘village’ practice involving local surgery: there is no hygiene, no cleanliness, therefore this causes infections. It leads to many, many, many infections. The women who perform the cutting are untrained midwives. Sometimes we have seen cases where the vaginal opening was completely closed. This causes terrible problems for the child.

A woman told us that she had been cut and it was totally sewn up, so she had no vaginal opening. On her wedding, her husband was unable to enter her, and she was in a lot of pain. She was taken to hospital, where she was examined and it was confirmed she no longer had a vaginal opening. She had to undergo a surgical operation.

In certain cases, once a woman is cut a large bulb forms which just about blocks the opening of the vagina. This also causes fistula, and they have to undergo surgery to try to correct the problems. And of course, for a mutilated woman, childbirth is very difficult.

I see no advantage in circumcising a woman, nothing but drawbacks. Not counting haemorrhaging. Some women when they are cut cannot stop bleeding and the haemorrhaging kills them.

This is an ancient practice which is very harmful. We must eradicate FGM. We must make this practice disappear because it really makes women suffer.

The testimonies we hear from women go right to the heart, they make us suffer in our soul. We must raise awareness, we must work to eradicate this practice so that women do not suffer any longer. They weren’t born to suffer so much.

Because the work we do, some are starting to understand and to abandon the practice of FGM. But in Burkina Faso giving up customs takes time, we have to go gradually. We must continue to raise awareness to repress the custom. Some men do not want the practice, but even so we need to constantly remind them. If you lower your guard, they will think the subject is no longer important. But if you are on the case, they know you are watching. Then they pay attention and those who want to practise the habit are afraid and give up. So to address female genital mutilation, you have to be there, you must always be ready to act.

‘Spreading awareness is the same process as planting millet. It’s just a seed at first and then it grows and we see the leaves.’

Forced marriages and early marriages are also customs that are deeply entrenched in Burkina Faso. Children of 13 years, 14 years, 15 years, are given in marriage. In some cases it is custom for children from 12 years to be given in marriage. We have to make these people understand that is not good for women. This is why we raise awareness. They must be made to know that a child must be allowed to reach 18 years, 20 years before they marry. We tell them about the disadvantages of forced marriage, that forced marriage can be bad for the child. Due to this raised awareness, some abandon early marriage. Again, you always need to raise awareness, and continue to do so – and to always be at their side.

But it is difficult to be everywhere at once. We must continue the education work – and if you cannot be everywhere, there is always the radio. When we make a radio broadcast, it covers a large area and we reach many people at one go.

But you still have to be present in person, so we travel a lot to raise awareness, hold discussion sessions, theatre forums and other things. We are managing to reduce the number of early marriages. People talk to us about it, so we know that our work is having an effect.

‘If men were mutilated and forced to marry against their will, maybe their resistance to change wouldn’t be the same’ Noelie Kouraogo, Amnesty International, Burkina Faso

Certain men – not all men but there are some – constitute an obstacle against women accessing their human rights. When we arrive in a village, the first thing we do is meet the village leaders and talk to them so that we are accepted before starting to work. If the leaders do not accept you, your work cannot succeed. This means we must meet the chiefs, the officials, the Imam, all the influential people around the village. When this is done, you can begin work without fear.

Generally, when we arrive, when the men and the women are brought together to talk, the women do not speak, they keep themselves to themselves. So we talk with the women separately, and everything we say is between us women.

They speak, they confide in us, they agree to share their knowledge with us, and at this moment we can have an exchange freely, correctly, without hiding anything. That is between us women.

Then we meet the husbands, also separately. We talk with the husbands and they tell us what they think we want to do. Sometimes they also agree to confide in us. They exchange and share ideas. Together we see how to succeed in the task. When we are trusted by the men,and we are trusted by the women, then we can bring them together and discuss things without difficulty.

If we only stay with the women and leave the men, then what we want to establish in the village will not succeed, because the woman will have knowledge, but she will remain alone with her knowledge. And then, how does she approach the man? So we approach them both, gain their trust, and then when we bring them together, it works.

When we arrived in the village of Boria the first time, we wanted to talk with the people, but not a single woman wanted to talk, it was only the men who spoke. We said to ourselves, in this village, we must do things differently.

The next time, when we returned we talkedfirst with the women. And they told us: “You came. You put us before our fathers-inlaw, and you wanted us to talk! What would we say? We cannot!”. If the father-in-law is present, the daughter-in-law cannot stand up up and speak. Then we talked with the men and then we found strategies to put them together. And today when we arrive at Boria, we talk to everyone, there is no problem, and everyone participates.