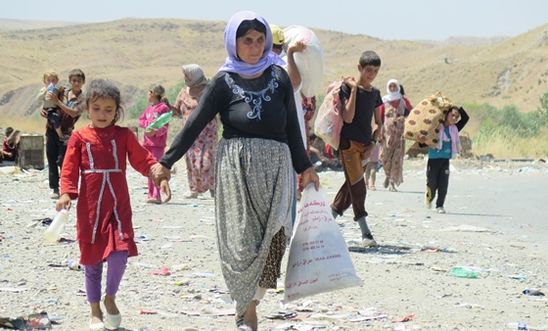 Thousands of Yezidi women and girls in Iraq have had their lives shattered by Islamic State (IS) fighters who have kept them in captivity and inflicted horrific acts of sexual violence on them.

Hundreds, and possibly thousands, have been forcibly married, ‘sold’ or given as ‘gifts’ to Islamic State fighters or their supporters. Many of those held as sexual slaves are children girls aged 14 and even younger.

The Yezidi are Kurdish ethnic group based in the north of Iraq. They were targeted in August 2014 as IS fighters on their campaign in the Nineveh region. Our researcher, Donatella Rovera, spoke to more than 40 women who managed to escape IS captivity in northern Iraq.

"She killed killed herself in the bathroom" Girls who escaped #ISIS captivity told me of horrors they endured - #Iraq pic.twitter.com/fVf2PwsZJC

Suicide to escape the horror

Some Yezidi women and girls were so severely traumatised that they have been driven to end their own lives.

Nineteen-year-old Jilan killed herself while being held captive in Mosul because she feared she would be raped.

Jilan's friend managed to escape. She had been held in the same room as Jilan and 20 others - including two girls aged ten and 12. She told us:

‘One day we were given clothes that looked like dance costumes and were told to bathe and wear those clothes. Jilan killed herself in the bathroom. She cut her wrists and hanged herself.
She was very beautiful; I think she knew she was going to be taken away by a man and that is why she killed herself.’
Yezidi woman who escaped IS captivity

Several former captives told us they had been held in family homes with their captors’ wives and children. Another women, Wafa, told us how she and her sister attempted to end their lives one night after their captor threatened them with forced marriage:

‘We tied the scarves around our necks and pulled away from each other as hard as we could, until I fainted … I could not speak for several days after that.’
Wafa

Stigmatised for being raped

The trauma of survivors of sexual violence is further worsened by the stigma surrounding rape. Survivors feel that their ‘honour’ has been tarnished and fear that their standing in society will be diminished as a result.

Meanwhile, many survivors of sexual violence are still not receiving the full help and support they desperately need.

Many survivors are also struggling to cope with the loss of dozens of family members who either remain in captivity or have been killed by IS.

‘The physical and psychological toll of the horrifying sexual violence these women have endured is catastrophic. Many of them have been tortured and treated as chattel. Even those who have managed to escape remain deeply traumatised.’
Donatella Rovera, Amnesty Crisis Response Advisor

As well as exposing the true horrors of life in Iraq, we’re calling on the Kurdistan Regional Government, UN and other humanitarian organisations to step up their efforts to support survivors of sexual violence. They must provide sexual and reproductive health services, as well as counselling and trauma support.