Johan Teterissa jailed for waving a flag in Indonesia 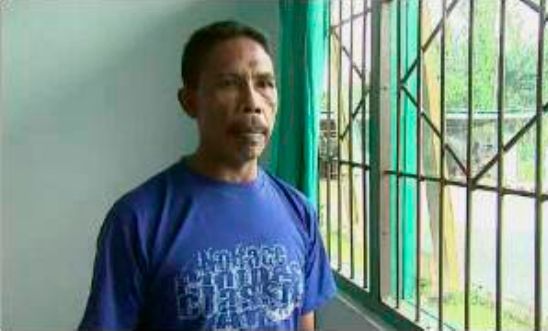 Johan Teterissa in his cell at the Waiheru Detention Centre, Maluku. © Amnesty International

Johan Teterissa, a primary school teacher in Indonesia, is currently serving a 15-year prison sentence for leading a peaceful protest in front of the President of Indonesia in 2007. He is a prisoner of conscience and must be released immediately.

During the 2007 protest, the Benang Raja, a banned regional flag, was raised. Johan and 21 other activists, mainly teachers and farmers, were punched and beaten by police and presidential guards.

The torture continued during detention and interrogation where they were beaten, forced to crawl on their stomachs over hot asphalt, whipped with electric cables and had billiard balls forced into their mouths.

After an unfair trial, Johan was convicted of rebellion and sentenced to life in prison. His sentence was later reduced to 15 years after an appeal.

Johan has now endured nearly seven years of torture and ill-treatment in prison. He has been shuffled between numerous prisons, always far from his family.

After his latest move to Batu Prison in July 2013, guards whipped him with electric cables until he bled. The following December, police and military personnel ransacked cells in the prison. Johan was stripped to his underwear and forced to sleep on a concrete floor.

Johan’s prison conditions have now improved, but we are still concerned about reports of overcrowding, poor sanitation and a lack of access to adequate medical treatment.

Thank you for calling for justice for Johan

More than 2,400 of you wrote to the Indonesian authorities to demand Johan’s immediate and unconditional release in spring 2014. Thank you.

On 28 April, lawyers supported by Amnesty International met Johan at Batu prison. They brought him clothes, shoes, letters and gifts as many of his personal belongings had been burnt during a prison raid in December 2013.

He was thankful for your campaigning and solidarity letters, and urged us to continue campaigning not just on his behalf but for all the other Maluku prisoners of conscience currently in prison on Java island, thousands of kilometres from their families.

We will continue to monitor Johan’s situation in prison while pressuring Indonesian authorities to release him immediately.