It's Time To Control The Arms Trade 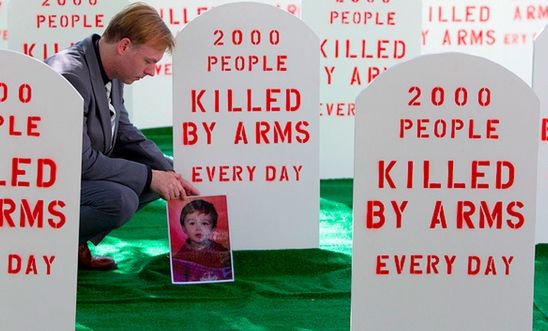 "Over 5 million people were killed by arms in the last decade. My son was one of them"

On 7 March 2003, a fight broke out in a café in Turkey and within moments, my life changed forever. My little boy Alistair, aged two, was killed by a stray bullet from a handgun.

Since then, for nearly a decade, I have campaigned for an international treaty to control the trade in guns and other weapons. With fewer weapons in circulation I believe that some of the lives lost to armed violence every minute of every day could be saved, and the suffering of families like mine prevented.
Take Action

You may remember how during talks at the UN last summer, we very, very nearly got there. Until at the eleventh hour, negotiations collapsed. We left empty handed. But next month, from 18-28 March, the world will meet to discuss arms control again.

During the last two years of conflict in Syria, thousands of men, women and children have died in deliberate attacks by government forces on civilian targets. With the right treaty, the sale of weapons from Russia to Syria used in such attacks could be stopped.

The right treaty would also prevent all the other ways arms are used to terrify, coerce and abuse.

Guns have been instrumental in the systematic rape of women and children in countries like the Democratic Republic of Congo. They have been used to arm child soldiers in Uganda and Cambodia. And from Syria to Somalia, armed conflict has left some 26 million people homeless.

Act now to stop atrocities and save innocent lives

Behind these numbers, almost too big to comprehend, are countless individual tragedies – grieving families, communities scattered, lives like mine torn apart at the seams.

I will be in New York for the negotiations next month, but like you I won't be on the negotiating floor itself. However, we have our chance now to remind the UK government of the human cost of the unregulated arms trade. So that when they represent us at the United Nations, they secure a treaty that stops the innocent paying the price.

Act now for an Arms Trade Treaty that saves lives