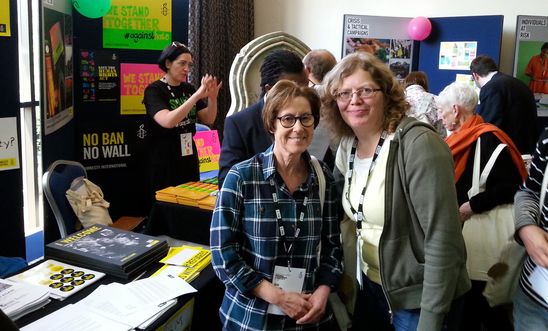 Two members of the Warrington Group, Gill and Sue, attended the conference this year at the East Midlands Conference Centre in Nottingham.  It is a great opportunity to meet other members and group representatives to learn from each other, debate current issues, learn about the key campaigns and to help set the direction for AIUK in the future.

A packed, two day agenda included business such reports by the Board and the Director, Kate Allen, and similar to last year, Kate was informative and inspirational as she outlined achievements in 2016 and hopes for the coming year.

Conference delegates were able to attend working parties on proposed resolutions before the voting session on Sunday.  Alternatively, there were a series of workshops to choose from including one titled, I Welcome, explaining how to support refugees and another on One-on-One Working with Individuals at Risk.

The candle lighter this year was Brendan Cox, an International campaigner and activist and the husband of Jo Cox MP who was killed in 2016.  He spoke very movingly about their support for Amnesty and his work on initiatives to build open communities in the UK.

Other highlights were the keynote speech and panel debate on Against Hate and the spotlight talk hosted by Kate Allen.  She chatted to Razan Ghazzawi who told Conference about her two detentions by the Assadist state in Syria and her current work with FREE Syria - the Foundation to restore Equality and Education in Syria.

As usual, there were lots of exhibitions and stalls in the Information Centre to browse and time to meet lots of interesting members and activists who share a common understanding of the importance of human rights today.

Conference is always in April so look out for the dates for next year as it comes highly recommended.