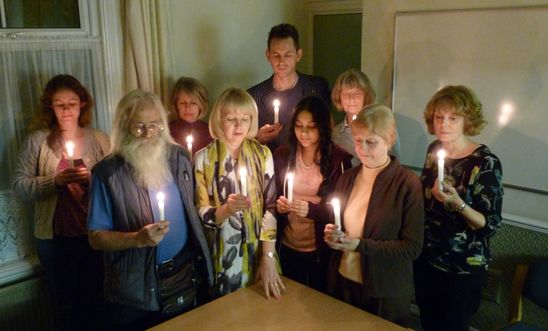 Members of the Sutton Coldfield Amnesty International group remembered the people of Syria in a candlelit a vigil this week.

The event at the group’s monthly meeting on March 10 was part of a series of global solidarity actions with the people of Syria all being held close to March 15. The vigils mark four years since the uprising began in Syria.

The events, which are taking place across the UK this week and have been organised by a coalition of human rights and humanitarian organisations including Amnesty International, Oxfam, Save the Children and Christian Aid, all carry the hashtag #withSyria.

The groups are calling on world leaders to fully fund the aid response and ensure refugees seeking safety can find asylum. The vigils also call for an end to attacks on civilians and the finding of a political solution to the conflict.

Sutton Coldfield Amnesty International group chairman Andrew Hindle said: “Our vigil is a matter of people in Sutton Coldfield saying ‘we haven’t forgotten, we’re still trying to help and are standing in solidarity with the people of Syria’.

“Syria is the world’s worst humanitarian crisis and we need world powers to come together and demand increased access for humanitarian aid into hard-to-reach areas.

“It is really important to mark this four-year point since the uprising began. We all want to see this terrible crisis resolved.”

Amnesty International campaigns for human rights and prisoners of conscience around the world.

The Sutton Coldfield branch of Amnesty International meets on the second Tuesday of every month (except August) at 8pm in the Conference Centre, Holy Trinity Catholic Church, 69 Lichfield Road, Sutton Coldfield, B74 2NU. New members are always given a warm welcome.