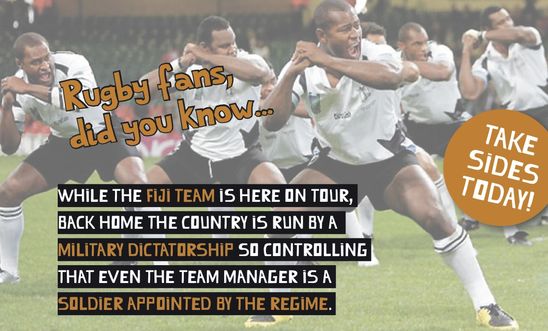 On Saturday 10th November,  R&T Amnesty and the TUC took part in a joint leafletting of the 60,000 crowd at the Twickenham friendly between Fiji and England.

For the past year Amnesty has been stepping up its campaigning for human rights in Fiji, especially in collaboration with the trade unions in UK, Australia, New Zealand and Japan as these are countries of economic influence on the regime, and in view of the serious repression of workers' rights and attacks on trade unionists since last spring.

The leafletting was organised by Shane Enright, AI UK Trade Unions Campaign Manager and Global Trade Union Adviser. The crowd was generally friendly and responsive and overall this seemed like a good opportunity to draw attention to the difficulties faced by many workers in Fiji at the present time.