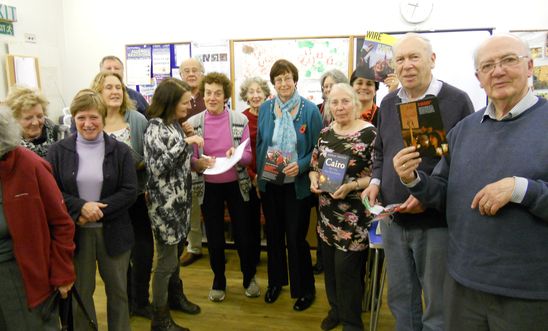 At our monthly meeting on 8 November 2012, we were really fortunate that Ann Marcus, Amnesty's Coordinator for Egypt, was able to come to Twickenham to bring us up-to-date with the current situation, events and actions in Egypt.

Ann described a complex and deeply troubling state of affairs in which hoped-for reforms following the revolution of January 2011 have not materialised. Therefore, protests on the streets have continued and police and military authorities have responded with increased violence and abuse, in some cases worse than under the previous, corrupt regime led by Hosni Mubarak. Journalists and medical professionals have been targeted, sectarian conflicts inflamed and little done to restore land and rights previously taken from the poorest sections of society.

After a brief experience of greater equality during the revolution, women appear to have been targeted for humiliating treatment to try to deter them from protesting. Ann described the appalling treatment of Azza Suleiman, who was severely beaten and injured after trying to help another woman protester. Although, following calls from women's organisations and activists, the Egyptian Prime Minister has stressed the importance of women's participation in politics and public life, so far there have been no concrete proposals for reform and nobody has been held accountable for this violent attack.

Azza Suleiman is featured in Amnesty's Write for Rights campaign and Ann hopes that some local groups in Britain will adopt her and pursue her case.

Following calls from women's organisations and activists, the Egyptian Prime Minister met with women's representatives on 22 March and stressed the importance of women's participation in politics and public life. Yet so far there have been no concrete proposals for reform.

To find out more about Azza Sulieman, send a message of support or appeal on her behalf, go to: