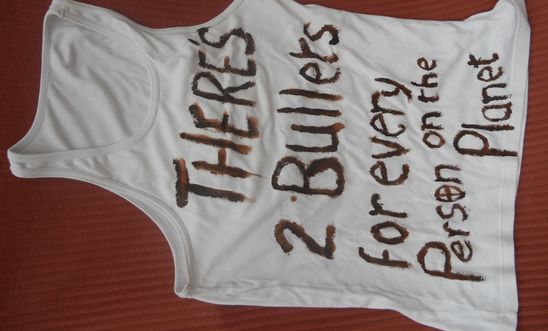 On Saturday 28 April 2012, Amnesty International held a workshop at  the Human Rights Action Centre as part of the Control Arms Campaign. 150 countries have expressed support for an Arms Control Treaty (ATT) and a date has been set for an international convention to agree the terms of the treaty.

Amnesty is calling for a robust and comprehensive treaty which will protect human rights and victims of irresponsible arms sales and also contain strong enforcement mechanisms which are binding for all signatories. At the workshop members were given a brief introduction to the history of arms trade control and keys issues involved. There was also some training in contacting and lobbying MPs and increasing public awareness of the campaign.

Subsequently, members decorated vests, all of which carried messages supporting the need for a 'bullet proof ' arms treaty.