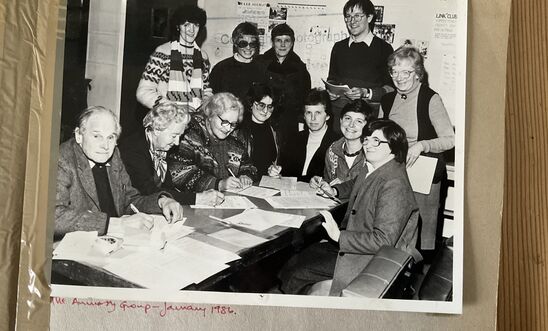 Inspired by Amnesty International’s celebration of its 60 years, we researched the beginnings of our AI group in Perth .

It was founded around 1980 (?) by Alison Elphinstone. She was employed by Perth & Kinross Council as a community worker. The group met in a Cathedral room, and established a good working relationship between Alison’s Council colleagues, and the church.  Other members included the Chairman, Robin Brooks, Jane Forbes, Ruth Harris, David Steuart from Perth Theatre, Elizabeth Pyefinch, Judy Thorpe, Jean Kirby, Cathy Marshall and her husband, Annette Perry and Lyn Slowman.

The photo shows a typical Perth AI meeting with the group writing letters to prisoners.

The Perth group birthed the Pitlochry Group, which was started by the late Elizabeth Pyefinch who had been a member of the Perth group. Jean Kirby was present at the first meeting and an active member for many years.

Their notable achievements include:

There has always been a good relationship between the Perth and Pitlochry groups. Cathy Marshall was the most recent secretary of Pitlochry Amnesty. When she and her husband were the only remaining members of the Group, they decided to end it, and thoughtfully delivered collecting tins, a huge candle and various other materials to the current Perth Secretary.