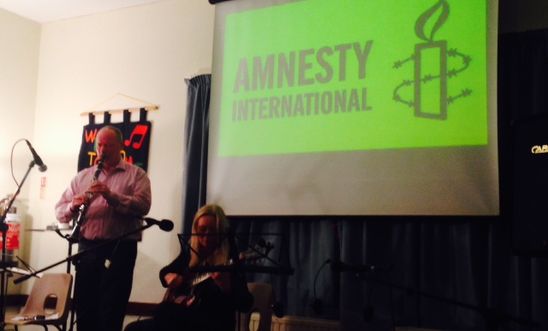 Mid Devon Amnesty International group held a successful evening of poetry and song on November 15 in Willand Church Hall, including a ploughmans meal, with bar, for the full house who attended. We managed to raise over £800 for Amnesty International and obviously raised the profile of the group and Amnesty at large. We read out statements about our link prisoners of conscience, and also about the foundation of Amnesty International. This was interspersed with music, both ancient and modern! We did this all in a cafe style so that people could talk to each other relatively easily. There was lots of discussion during the 30 minute interval, and many people took away the information about Amnesty - hopefully some new members will join! One person had already been on one of our Amnesty walks and, as a talented cello player, was able to come and share her musical skills with us. In all it was a very successful evening made so by the hard work of the Committee members.