Amnesty concert for Save the Children 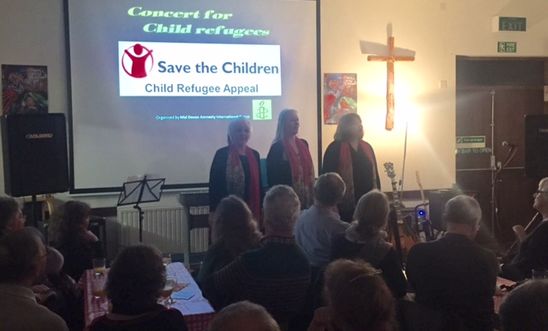 In Harmony in concert at Willand

A capacity crowd of over 100 crammed into Willand Church Hall on 8 January to enjoy what has become a popular annual event organised by Amnesty International Mid Devon Group. This year, following the distressing events of the last few months, the Group decided to raise money for Save the Children's Child Refugee appeal, rather than directly for Amnesty International. A very talented group of different local performers sang, played and recited their way through an evening that was lighthearted at times, but also highlighted the plight of both refugees and of the prisoners of conscience supported by Amnesty. At the end of the evening a cheque was presented to Judith Ezard, the local Save the Children co-ordinator, and the final total raised was a record £1931. Many thanks to all those who planned and set up the evening, provided technical support, staffed the bar, provided and served the interval food - and of course to those who took part, and those who came along for the evening.