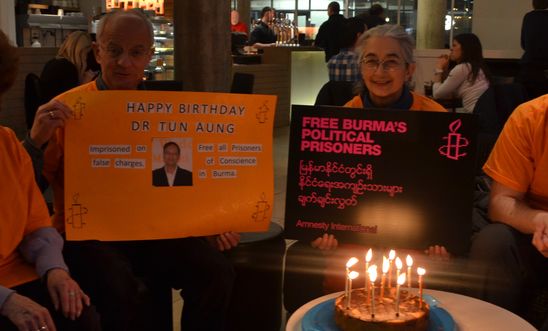 On the 9th of April, members of Manchester Amnesty gathered together to mark the birthday of Burmese Prisoner of Conscience, Dr Tun Aung, and continue to raise awareness of his plight along with that of the many other prisoners of conscience who remain behind bars as the country undergoes significant changes.

Due to his position within the local community in Maungdaw, western Myanmar, Dr Tun Aung was asked by the authorities to help diffuse tensions between Rakhine Buddhists and Rohingya Muslims in the area in June 2012.

However, having done as he was asked he was subsequently arrested on charges of inciting violence. His birthday on the 9th of April marks nearly 10 months since his arrest. During this time, has mainly been held incommunicado; he has been denied the right to appoint a lawyer of his own choice and has been allocated a state lawyer whom he has not been allowed to meet privately, diminishing the likelihood that he will receive a fair trial.

Manchester Amnesty has a strong history of working on behalf of Burmese Prisoners of Conscience, and will continue to do so whilst there is still so much to be achieved to defend the rights of the Burmese people, despite the current atmosphere of reform.