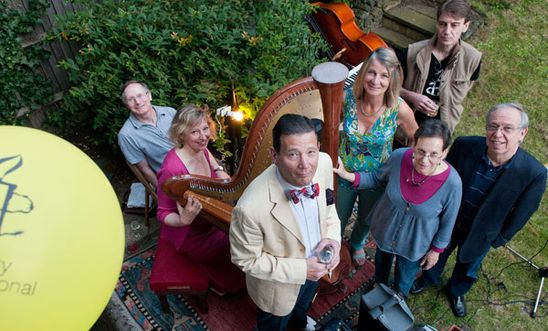 On Saturday 28th July the Hornsey & Wood Group's annual summer music garden party happened again at David Robinson's house in Crouch End. He's been a kindly, generous host now for 12 years and each year it has been a resounding success in both fund-raising and entertainment.

This year about 100 people came and the guest star was Group member, Fiona Thompson who played harp solo followed by the group The Silver Ghosts. Poetry and comedy acts then followed a short address by Paul Duployen (Chairman) who talked about Amnesty's current concerns (ie. the use of Dow Chemicals as partner of the London Olympic Games site with their link to the chemical plant responsible for the 1984 Bhopal disaster in India - also the final negotiations taking place now in the United naitons for the first ever international Arms Trade Treaty.)

About £750 was taken at the door and music and dancing continued until after midnight.