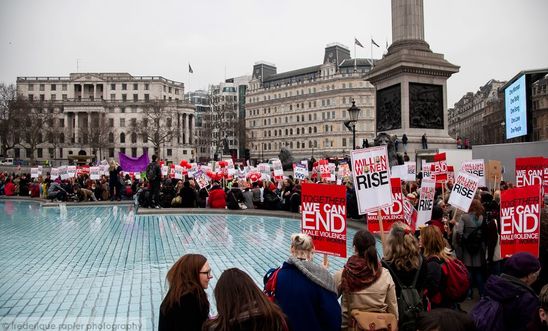 On Saturday 9th March one of our group members, Linda, went on the Million Women Rise march in London. Million Women Rise are an organisation dedicated to highlighting the continuation of all forms of violence against women. They demand that steps are taken to end it and work with UK and international women's movements. The London march was attended by thousands of women, all with a desire to highlight injustice and offences against women such as the gang rape of the medical student in India.

“I attended with my 12 year old daughter and a friend from University. We drove to Redbridge and got the tube to the meeting place on Oxford Street. At first there did not seem to be many of us, but it was exciting to see coaches arrive and the group build into a throng of ethnically diverse, chanting women. As the crowd marched towards Trafalgar Square, many women shoppers joined us. Lots of bystanders videoed the march and smiled and encouraged us all. The atmosphere was pretty dynamic. All in all a rewarding and meaningful day out!”

For more details, and photos of the march, see the Million Women Rise Facebook page: https://www.facebook.com/MillionWomenRise