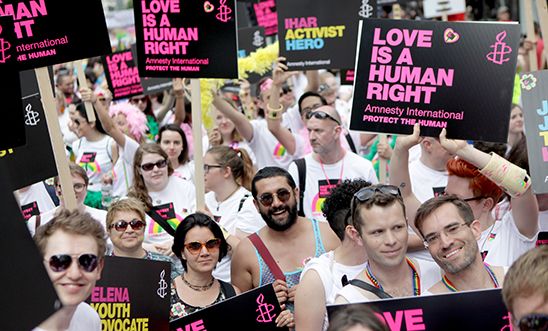 In April 2016, Theresa May said that the UK should reject the European Convention on Human Rights (ECHR) because it ‘makes us less secure’ – a proposal that would strike at the heart of international rights protections.

People fought for our hard-won rights over generations. Many are still fighting for their rights every day, using the ECHR and often against overwhelming odds; the Home Secretary should not abandon them.

The Convention has done so much for the rights of the free press, LBGTI people, women, people with disabilities and many more in the UK and across Europe, but here are just a handful of times it’s changed our lives for the better in the UK:

In a landmark case in 1999 (Smith and Grady v United Kingdom), the European Court of Human Rights (ECtHR) unanimously found that the discharge of military personnel from the Royal Navy on the basis that they were gay was a breach of their right to a private life. Shockingly, the UK High Court and Court of Appeal had previously found that the military had not acted unlawfully. It wasn’t until the ECtHR’s ruling that the armed forces finally backed down and withdrew their long-standing ban on gay people serving in the military. In 2007 the Ministry of Defence formally apologised for this policy.

Smith and Grady weren’t alone – until 1982 it was against the law for gay people to have sex in Northern Ireland. In 1975 police searched the home of Jeffrey Dudgeon, a shipping clerk and gay activist living in Belfast, combing through his diary entries and personal documents. The next day they interrogated him for four and a half hours on his sexual activity, though decided not to prosecute him. Dudgeon filed a complaint about the laws and in 1981 the European Court ruled in his favour – soon afterwards Northern Ireland decriminalised homosexuality.

In 2002, a woman travelled to the UK from Uganda to escape sexual and physical violence. A relative, who lived in London, helped her get a false passport and a visa to enter the UK, but when she arrived he took these documents from her. The relative arranged for her to work as a live-in carer for an elderly couple – she was required to be on-call 24 hours a day and her wages were sent to her relative.

In 2006 she went to a local bank to alert the police to her situation. Before the police arrived, she collapsed in public and was later diagnosed with HIV and psychosis. After leaving hospital, she was told by the Police that under the UK law at the time, her case wasn’t considered to be one of human trafficking. She applied to the Strasbourg Court, saying the UK had failed in its obligation under Article 4 of the ECHR properly to investigate her case, probably because it did not have in place effective laws to deal with forced labour like this.

The European Court agreed. It found that UK law had been inadequate to protect her. The case paved the way for the Modern Slavery Act in 2015.

3. Keeping children safe from the cane

Corporal punishment was still legal in UK schools until 1986. When Jeffrey Cosans, 15, was suspended from his school when he refused to be struck with a belt, his mother Mrs Cosans and another mother from his school, Mrs Campbell, took the authorities to court.

4. Fighting for a free press

During settlement negotiations about the Thalidomide disaster – in which a drug was marketed as a mild sleeping pill safe for pregnant women but caused thousands of babies worldwide to be born with malformed limbs – the High Court stopped the Sunday Times from publishing articles critical of the settlements and further supporting the victims, saying they were in contempt of court.

In the 1979 case of Sunday Times v UK, the European Court said that the authorities had violated the newspaper’s right to freedom of expression. The injunction was lifted and the article published four days later.

Ms Copland discovered that her employer, the Principal of Carmarthenshire College in Wales, had been spying on her correspondence, her emails and phone calls over a period of three years in order to find out whether she was in a relationship with the director.

In 2007 Ms Copland took her case to court, arguing that this was an invasion of her privacy. The Court agreed – and because of this judgement new laws were put in place to regulate how employers can monitor your communications.

Take action: Sign our petition to save the Human Rights Act